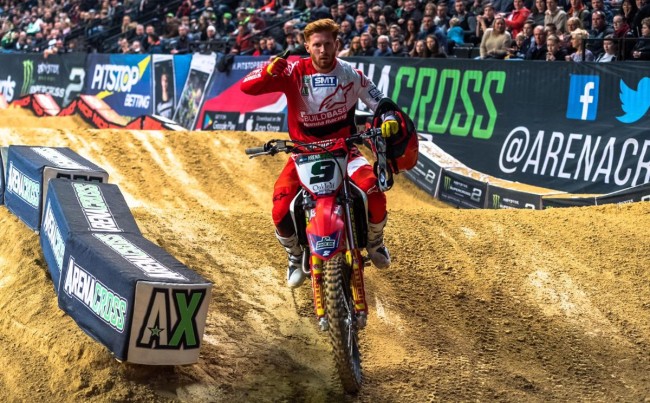 Buildbase Honda’s Adrien Escoffier and Adam Chatfield both clinched series bronze medals as the 2019 Arenacross Tour signed off with a double-header at Sheffield’s DSA Arena on Friday and Saturday nights.
Competing in the super-competitive Pro Lites class, Adrien went 5-3 in his two Main Events on Friday on his CRF250R and took second in the Super Final. He then finished fourth in his first Main on Saturday but crashed second time out before claiming a solid fifth in the Super Final.

His scores over the six-round series earned him third in the Pro Lites and fourth in the Pro AX classes.

Adam, the inaugural Arenacross champion in 2013, continued to build throughout the series on his CRF450R and backed up a pair of third-placed finishes on Friday with a sixth in the Super Final. On Saturday he ran 3-1 in his two Main Events before taking fourth in the Super Final to claim third in the Pro 450 class and seventh in the Pro AX category, cementing his position as best British finisher.

“Saturday was really good and it’s always great to get a win,” said Adam. “It’s been a good weekend although I was a bit disappointed with the Super Final on Saturday to just miss out on the podium.”
The team’s third member, Pro 450 rider American Austin Root, crashed on Friday before a slip on Saturday in the Last Chance Qualifier put him out of contention for a place in the Super Final.

“Sheffield went good but luck wasn’t on my side on Saturday when I pulled the start in my second Main Event and they red-flagged it,” said Austin. “In the LCQ I had another good start and made some passes but then I just slid out on my own. I had some decent rides but I was already super-sore before I had a big get-off on Friday so I’m happy just to be in one piece.”

Team boss Dave Thorpe was happy to see Adrien and Adam go out on a high.

“We’ve had two good rounds,” he said. “In Friday night’s Super Final Adrien had a great start and on the last lap he had a bit of good fortune when Greg Aranda and Cedric Soubeyras had a coming together and went down which gave him second.

“Saturday didn’t quite go to plan for Adrien. He was a solid fourth in the opening Main Event but was taken down in the second when someone went underneath him. That put him in the head-to-head races and he rode very well to win.

“You have to be on top of your game with Arenacross and Adam has just got better and better. He will say that his sixth in the Super Final on Friday should have been fourth if he hadn’t made a little mistake which was expensive but we were more than happy as a team with a second and a sixth.

“Adam was first overall with a three and a one on Saturday. He had a good start and made it around a hectic first turn. Adrien chose to go on the second row and they were a very good fourth and fifth which I was delighted with. Adam rode absolutely amazingly – he was top Brit.

“You can see that Arenacross is a little bit of a mystery for Austin but he had some bad luck. He holeshot his second Main Event and was leading when the red flags came out because of an accident. He was then looking strong in the LCQ but lost the front wheel and crashed.

“It’s been an amazing series for the team and our partners. I’ve thoroughly enjoyed it. The show itself has been absolutely first-class, the tracks have been fantastic and the atmosphere has been great. We’re proud to be associated with it.”