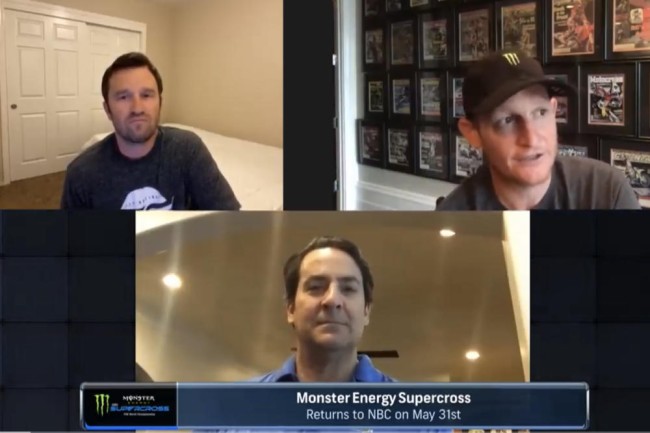 Ricky Carmichael has given his assesssment of what it will take to be champion in the unique seven-race run in to the 2020 supercross championship that will see mid-week racing and less time to prepare for the each individual race.

“It’s definitely going to be interesting, I’m excited to see how it is going to play out,” admitted Carmichael while talking with his broadcast colleagues, Daniel Blair and Ralph Sheheen. “This is a blessing for some guys, one of the them being defending champion Cooper Webb. It’s going to be a challenge for Eli Tomac and Ken Roczen”.

On the different schedule with seven races in three weeks, RC said: “There is a lot of new elements certainly and it is going to be the guy that can adapt to the situation the best. Their program, their team, their trainer, whatever it might be. Dieting recovery time, we are going to be in elevation, recovery tomes are different in elevation, normally it takes a little but longer, normally you can’t go quite as hard because of it, so a lot of moving parts”.

“You look at Eli, he lives in elevation, he should be good, he has been the fastest guy of late but then it’s a short championship. It’s almost a seven round championship and Ken Roczen, if you go back to the beginning part of the season, is always really, really strong at the beginning of the series”.

“Those guys are so back and forth and really have no weaknesses and, at the end of the day, it’s going to be who can get their mind to where it was when we left Daytona. Which guy is going to come into this championship, get that championship mentality right back into where they were and pick up where they left off back in watch.”

Listen to the full conversation with Daniel Blair, Ralph Sheehan and Ricky, below: