Cairoli offers an injury update and being ready for 2020 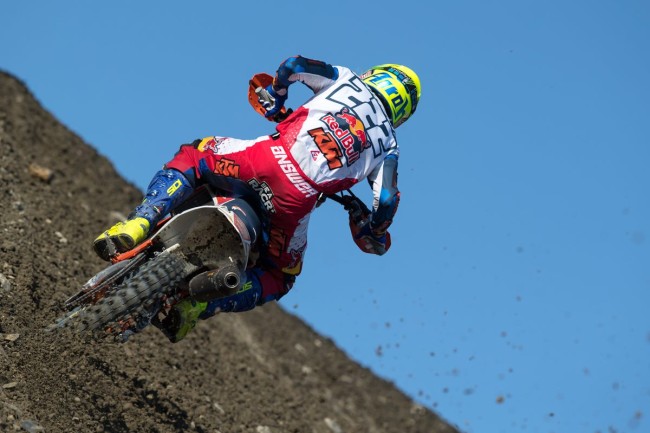 During the latest MXGP studio show both Lisa Leyland and Paul Malin welcomed Antonio Cairoli who was a guest.

Cairoli offered an update on his injury which has ruled him out for the rest of the season.

“It’s been a difficult time. We didn’t know exactly the problem with the crash in Russia. All week I wasn’t feeling well and I didn’t have the power in my arm. I was riding in Latvia because I really wanted to chase the title but I wasn’t in a good shape. I struggled a lot, especially on Saturday. The first moto on Sunday was actually good, I tried to stay in front and I stayed in front of Tim, that was the plan. Second moto, I got a bad start and I tried to push immediately from the first corners. With the shoulder problem, I didn’t have power in my arms. I got a strange kick and I couldn’t really respond the handlebar with the power. I crashed, broke another tendon and another problem with the shoulder. Not the way we wanted to end the championship but it’s a part of racing,” Cairoli stated.

“Before Latvia with the sand riding in the week, I could barely make ten laps and I felt something was wrong. Normally I do a lot of push up’s but I couldn’t really do one or two. The situation was quite bad but like always I try to stay at the racing and try to do my best to chase the title”, added Cairoli.

Before the Indonesian rounds, Cairoli tried to ride but knew that he wasn’t going to race at those two fly away GP’s. After a check up he knew that surgery was required.

“Before Indonesia, I tried to ride, we even sent the bikes there because I wanted to give everything there to try. I tried to ride but it wasn’t really possible and it was dangerous to ride. I decided to rest a couple of days, get a scan on my shoulder when things were more clear. I went to Belgium and the doctor saw the scan, they said it’s quite bad and that I needed to get surgery as soon as possible, the rehab would take four months. I had no choice, I needed the surgery”.

The nine times world champion isn’t in any rush now and just wants to be ready to go again in 2020. “At the moment, I am in no rush, I will take my time to be ready for next season”.

If Cairoli didn’t get injured then we never know, he might have won his tenth world title to go equal with Stefan Everts but unfortunately, injuries are part of this sport.

“I never felt it wasn’t possible. I was really motivated to be World Championship again this year. You always do. All the riders out on track, they start the season to win always. It’s part of the game sometimes, that things don’t go to plan and you fail. This time it was my fault with the crash. We will try next year to be more consistent and more prepared for another difficult season”, Cairoli said.

One of Cairoli’s favourite tracks is Lommel as he loves the deep sand but Desertmartin is also up there amongst his favourites. “I really like sand that everyone knows, Lommel for me is a nice track. In the past I’ve ridden a lot of nice tracks, especially in the UK – Desertmartin, Matchams Park, all these wide tracks with places to pass”.

On what made him mentally strong, Cairoli says a big part of it is knowing your limits and not pushing over the limit all the time.

“The key is to have fun and always enjoy what you’re doing. This is the most important thing for a long career. You need to know you’re limits too and not be hungry for victory all the time. You need to understand when it’s your time and when it’s not, this makes a difference injury wise. You can make more season’s then than someone that maybe goes 120% over four seasons but then are completely damaged”, Cairoli stated.

Let’s hope the nine times World Champion makes a good recovery so we can see him battle at the front in 2020 again with the likes of Herlings, Gajser, Febvre and his young apprentice, Jorge Prado!