Cairoli and Prado on their Mantova wins 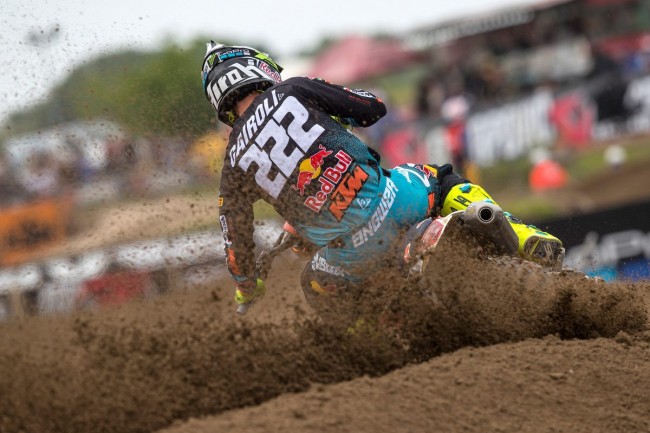 The compact and sandy Mantova circuit entertained the FIM Motocross World Championship for the first time since 2016 and the fifth round of the current 2019 campaign (the second event on Italian soil this season) saw Tony Cairoli triumph for the fourth time this year while MX2 World Champion Jorge Prado posted results of 1-1 for his fourth shut-out. The terrain was wet, bumpy and slippery after thunderstorms and showers had softened the Italian surface Saturday night and Sunday morning. MXGP gathered together for first time in four weeks after the rescheduling of the Grand Prix of China left a long hiatus on the calendar.

Tony Cairoli set expectations for his second home Grand Prix of the season by taking a commanding victory during the Saturday Qualification Heat for his second Pole Position of the term. The championship leader and winner of 5 from 7 motos in 2019 so far, made sure of the holeshot in the opening race under persistent light Italian rain and rode to victory without pressure. Many riders fell in the conditions, made mistakes and had to use the new Goggle Lane. Cairoli’s form and precision was impressive and in the second moto – as the rain continued and the track was at its roughest – he was again dominant. Tony’s fourth win from the five Grands Prix in 2019 means he now has a career total of 89.

Teammate and World Champion Jeffrey Herlings took his first tentative laps on his 450 SX-F the week before the Grand Prix of Lombardia and will now build-up his bike fitness and speed ahead of a competitive return in the near future.

Cairoli holds the red plate as series leader by 40 points from Tim Gajser.

Tony Cairoli: “It was very nice to be back in Italy and despite the weather there was a lot of people here today. The race itself went perfectly and we knew the start would be important, especially on a track that was so rutted – it was completely different to what it was yesterday. I’m really happy and thanks to all the team for their great work. It is very early to look at the standings so my focus is to stay in front as long as possible and try not to make a mistake. Hopefully we can be on the podium again next week in Portugal. It is important to be consistent and my goal this season is to always be in the top three. We’ll see how it goes.”

MX2 World Champion Jorge Prado negotiated his first Grand Prix at Mantova with style and remains unbeaten in 2019 with eight wins from eight moto appearances. It was the Spaniard’s holeshot in the first outing (his sixth of 2019) that allowed him to escape from the pack. In the second moto he overtook teammate Tom Vialle (Red Bull KTM earning both holeshots on the day) to ease his way through a rutty and tricky course for his fourth double of the campaign.

The Red Bull KTM MX2 awning was full of ‘rookies’ in Italy. Tom Vialle was also circulating Mantova for the first time in the context of Grand Prix. The Frenchman rode to 23rd in the first moto (due to a crash after running high on the leaderboard) and then turned around his results with a 3rd place in the second race despite a painful left knee and left thumb after a fall on Saturday. Austrian prospect and EMX250 runner, Rene Hofer, made his MX2 debut at Mantova. The youngster showed top fifteen pace on Saturday but a tumble and twisted knee ended his first moto prematurely and he elected not to line-up for the second sprint.

After five rounds Prado is just 7 points behind Thomas Kjer Olsen in the MX2 standings.

The FIM World Championship moves immediately west with a long trip to the popular Agueda circuit for the Grand Prix of Portugal next weekend.

Jorge Prado: “After a month off it was good to come back and get on top of the podium; for the confidence also. I felt really good here from the beginning and it was important to make good starts today: that was the key of the race, as well as staying on two wheels! I enjoyed the second moto a lot. It was really nice to ride that track. It is a place where you need to get the rhythm and let it flow and roll. I could make it happen today. It is very difficult to stay at this level and not make any mistakes and good starts every time: it’s tough. I need to keep concentrating and catch the lead.”

Tom Vialle: “A much better second race and a good start. Jorge passed me on the first lap so I decided to follow him and I’m pleased with my feeling on the bike. The track was difficult with long ruts and I had some pain after my crash yesterday but to come back with that result in the second moto was good: I’m happy and a big thanks to all the Red Bull KTM team.”

Rene Hofer: “My first GP and it was exciting but also a bit disappointing. It was good to see and learn about the class and the speed of the guys, and I think I was riding pretty OK but when I caught my knee in the first moto I had a lot of pain. There is a little bit of damage to the ligament but I should be OK for the next round of the European Championship.”

Dirk Gruebel, MX2 Team Manager & Team Technical Co-ordinator: “More great results for the team and there were some tough conditions today. We didn’t have any problems, luckily, because a lot of bikes out there stopped or had trouble. Super-strong weekend from Jorge and Tony while Tom rode a bit conservative and stiff in the first moto after his crash but then surprised everybody with that third place in the second race: a holeshot from 32nd position was impressive. He was a little hurt from Saturday but I think we can be satisfied overall today.”