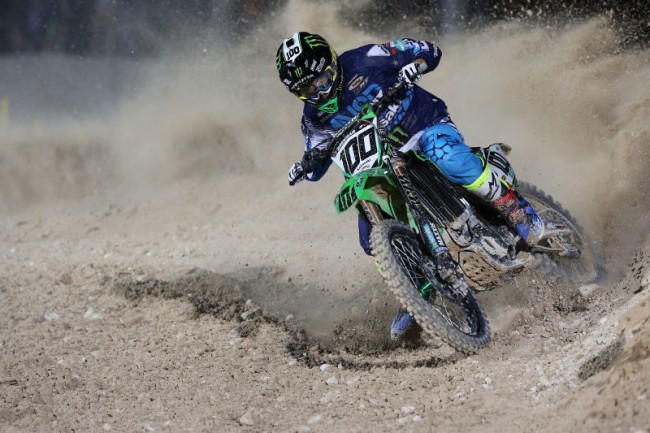 Tommy Searle – “I’m really enjoying riding at the moment. It’s obviously a new team for me and i am back racing in England and with a British team, its a good atmosphere, good team to be around and i’m really enjoying my riding. “

Shaun Simpson – ““It’s been a tough day and not really what I wanted. Two second places and second in qualifying as well. I didn’t really ‘feel it’ this weekend and wasn’t 100%. I was looking to come in strong but I’m a bit dismayed that Tommy made such a big gap. So, overall not a good day but we’ll re-group and figure out things this week and two second places was not a disaster for the championship.”

Martin Barr – “First round of the British championship done and dusted! Qualified 4th, race one ended up 3rd after a poor start,race two better start and was running 3rd but went down first lap,got going again in 7th then two laps later I got a rear puncture so ended up 12th which gave me 5th overall! Frustrated but it’s a long season! Thanks to everyone for the support”

Carlton Husband – “Not happy with how today turned out made it hard for myself with really bad starts and track was hard to pass. 14th overall will be better next round for sure. Thanks to everyone involved at the Phonixs tools team and everyone else who helps.”

Josh Spinks – “A steady 12th overall to start the season off! Starts were a big problem starting from the back in both races. But enjoyed my riding and no where to go from here! Big thanks to the team and all that came to support me”

Luke Norris – “Not the start to the British championship that I wanted, rode alright just couldn’t get out the gate. Just gotta keep plugging away”

Brad Anderson – “Not the best of starts to the British championship, disappointed with my riding, couldn’t get a start all day and the track was so hard to make time up. Lets hope I have better luck at the EMX300 this weekend. Thanks to team Verde sport for there hard work”

Gary Gibson – “Home in on piece after a tough but really fun first round of the maxxis. Managed to come home with a point 20th & 26th. The s.scott & son Norman watt Kawasaki was on point today. Big thanks to the family always there for me 100%”

Lewis Trickett – “Had a nightmare today, dropped my porridge on the floor this morning. In race 1 a stone managed to wedge it’s self between the frame and the rear break lever so eventually it stopped the rear wheel and we spent ages getting the stone out so I was a few laps down. Race 2 was very average, rode rubbish finishing 8th. Be glad to get into bed tonight and move on. Thank you to the team for their efforts William Irvine, Ryan Thorpe and Dave Thorpe!”

Stuart Edmonds – “Today went ok i managed 11th overall with a 14th and 12th score. My starts weren’t the best and i had a crash and a stall so i felt it was good to get back to where i was. Just need that start and I’m there but looking forward to USA now on Tuesday to jump back on a sweet little 2 stroke. Big thanks to my team Metcon CCR Tm today for their help the lads where brilliant and also to all my sponsors getting me there”

Ashley Wilde -“Not the start to the Maxxis ACU British Motocross Championship I was hoping for today. Struggled a lot with the track and rode as stiff as an ironing board.
11-11 in the races. R2 I was given a 5 place penalty due to an exhaust problem. Back to work over the next few weeks to get things sorted!”

Lewis Tombs – “Happy with my start at the Maxxis British Championship, battled too a 9th in the first race and a good 5th in the second gave me 6th overall. Big thank you to everyone who helped.”

Dan Thornhill – “Tough start to the Maxxis British Championship today but after the week I’ve had to get two point scoring rides was like a win for me today. 17-19 for 18th overall. Not what I was looking for but points are points. Time to take some time off and get my shoulder fixed up. Big thanks to everyone involved within CabScreensLiuGongHusqvarna and all my personal supporters”