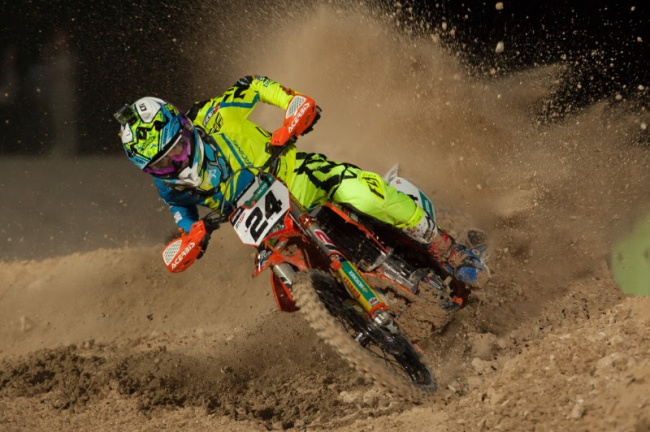 Andy McKinstry – It is looking like it’s going to be a Searle and Simpson battle for the British title this season in what could form into be a fierce rivalry. Both will really want to win the title and be the main man for the GB MXDN team in September. Searle will be really fast and win a lot of moto’s I think but I can’t see him beating Simpson for the title due to the amount of sand races. If it was hard pack it could be a different story!

Behind those two boys are a host of riders that could get podiums – Nicholls, Irwin, Banks-Browne, Lenoir and Whatley to name a few! Whatley and Nicholls probably won’t bring their A game into the first round.  Kristian has only been on the bike a few weeks and Nicholls has had a few tough years with injuries so needs to get his speed back. It’s a tough one but I’ll go with Irwin for third in the championship!

After missing out on the title last year, Steve Dixon will be hoping that Russian talent, Vsevolod Brylyakov can do the business and I am tipping him to win the title! However, it won’t be easy that’s for sure and its important he doesn’t under estimate how fast the British guys are in their home turf.  Ben Watson will be right up at the front and is quality in the sand. It is a shame Adam Sterry is injured as he wouldn’t have been too far away from the front but he will be strong when he returns to action. Buildbase duo, Lewis Trickett and Martin Barr will be strong on the Honda’s. Steven Clarke, Bryan Mackenzie, Liam Knight and Neville Bradshaw add some good depth to the field as well.

Jonathan McCready: It all starts tomorrow and the MX1 class is stacked full of talent! But the championship in theory should come down to a duel between Shaun Simpson and Tommy Searle. Searle hasn’t raced a full British championship series since he was a teenager but he will be out to win and stop Simpson’s championship streak. But with most of the tracks on sand circuits I think I will just give the edge to the Scotsman. Behind them it is nearly impossible, Graeme Irwin is on top form already while Nicholls, Whatley, Lenoir, Anderson and EBB will be knocking on the door for podiums as well and starts will be crucial all year.

At Lyng Tommy Searle will be determined to make a point to Simpson and start the season off strong, I think he might edge the win from Simpson with the in-form Irwin rounding off the podium.

In MX2 Vsevolod Brylyakov has been showing very good speed in the GPs but Ben Watson has a lot more to give this season, knows the tracks and is excellent in the sand. The title could come down to those two and this might be the year Watson matures into a British Champion. But Ulsterman Martin Barr has been in inspired form so far on the Buildbase Honda and could well put the cat amongst the pigeons if he gets the starts with the GP regulars. Adam Sterry will miss the first round but as we saw last season anything could happen and Adam may still be in the hunt if he can hit the ground running at Canada Heights and the others have bad luck. Bryan MacKenzie and Steven Clarke can never be counted out either and it could be a case of the youngsters v the veterans in MX2 this year!

As for Lyng it is hard to look past Max Anstie on the factory Husky for the win!