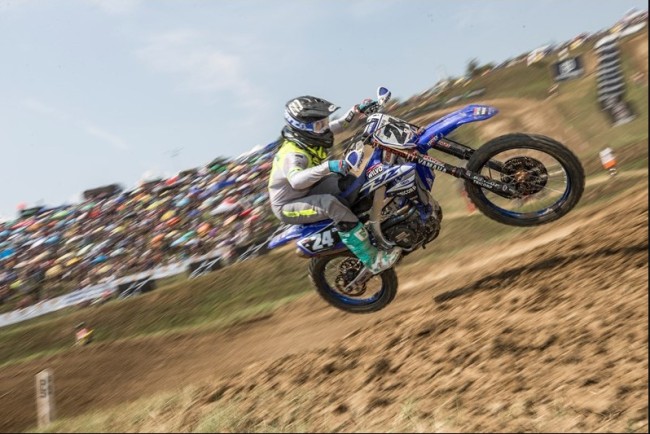 On paper it looks like it will be Tommy Searle v Shaun Simpson for the British title. Searle has started out on the right foot this season with a great seventh overall at the first GP and right behind him in eighth overall was none other than Shaun Simpson!

The duo have had a sometimes heated rivalry but now there is a lot of mutual respect between the pair and they tend to be batttling a lot at the GPs these days never mind the British championship.

Injury will force Jake Nicholls to miss the first couple of rounds (Lewis Tombs will fill in) while Searle’s BOS Kawasaki teammate and defending British champion won’t be at round one due to a wrist injury, also absent is 2017 British champion, Graeme Irwin, who was forced to short circuits after a sustaining bad wrist injury at the final MXGP of the year in 2018.

And only injured last week to add to the lengthy list is former MX2 British champ, Elliott Banks-Browne, which means there will be a lot of top contenders missing at the opening round, leaving plenty of opportunities for others to be at the sharp end!

Harri Kullas on the CAB Screens Honda has been in superb form recently, showing great speed at Hawkstone and winning round one of the MX Nationals, he’s also very good in the sand and could push Searle and Simpson at FatCat.

Gert Krestinov is always a contender each year and should be strong again as will the always improving Ryan Houghton on the Yamaha and Jake Shipton and Brad Todd can always show a good turn of speed.

James Dunn has switched back to a four stroke this year and his smooth style should suit the 450 Husky with former 250 title contender Mel Pocock stepping up to the 450 class on the ASA KTM and could well be a threat to podium during the year with Pocock enjoying the extra power the 450 has.

Irish riders Stuart Edmonds and the returning Richard McKeown will also be hoping to impress and get some top tens with an extra MXoN spot on the line at the end of the year in Assen following Irwin’s injury!