Boisrame on his Portuguese victory! 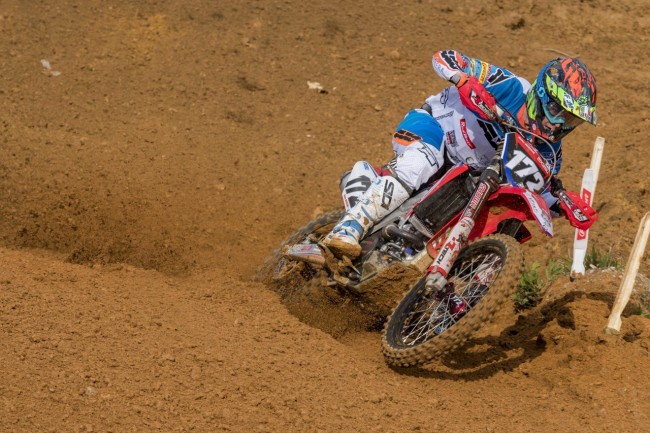 The rain-affected Agueda track in Portugal, ended up producing an excellent weekend of racing, with Tim Gajser making a welcome return to the podium after Mathys Boisrame had won both of his EMX250 motos.

In the EMX250 championship, Assomotor Racing rider Mathys Boisrame put in two great rides after two holeshots, to win both races in completely different conditions. In the rutted hard pack on Saturday and the muddy conditions of Sunday morning, Boisrame showed he was the best rider of this extremely competitive field and with his 50 points, moved himself right up into title contention. He now sits just 15 points behind the championship leader and with Russia being one of his favourite tracks, he has a good chance to close the gap even further at the next round.

Elsewhere in the class, Alberto Forato and the Carglass Honda duo of Freek van der Vlist and Steven Clarke all scored points.

The riders now have a weekend off before making the journey to Russia where the action will take place on the Monday and Tuesday, in order to coincide with the May 1st Russian National Holiday.

Mathys Boisrame 172
It was a good weekend with two very good races. I got a great starts and I felt really comfortable on the Honda all weekend. I got two holeshots I believe, which was important because all the mud made the track very difficult in race two, so I am very pleased with how it all went. I am really excited to go to Russia now, because my confidence is high, I like the track and with this result I have moved into fifth place in the championship.

Gordon Crockard
Honda Europe Off-Road Manager
The highlight of the weekend for me was Mathys Boisrame winning both races convincingly in the EMX250 championship. Mathys pulled two holeshots, confirming the strength of the new Honda CRF250R, before mastering the technical conditions better than anyone else. With those results he rocketed himself into the top five of the points standings, just 15 behind the leader. This was really wonderful to see and I think the next race in Russia will be very exciting for him. It will certainly be refreshing to get to the hard-pack track in Russia, after the tricky surface that we had here in Portugal. With a weekend off before, it should give our riders a good chance to prepare, for what should be an exciting round of action in all three classes.