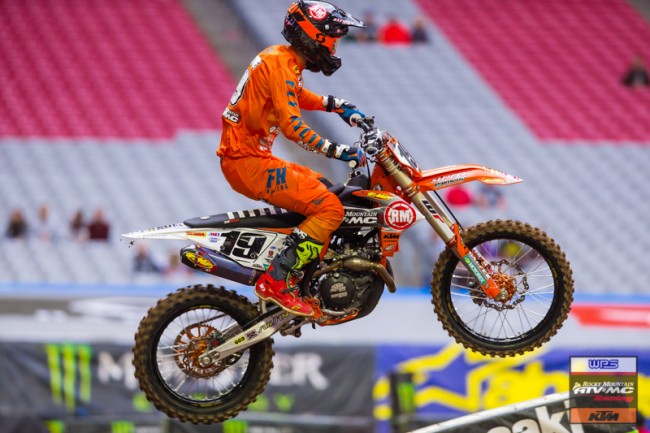 Justin Bogle, after dropping down the field at Budds Creek despite starting up front, has revealed he is suffering from the Epstein Barr virus, the same issue that wrecked Thomas Covington’s return to the States as well as most of Darian Sanayei’s Grand Prix season.

With no energy it makes sense as to why Bogle was unable to stay closer to the front and has somewhat struggled this year, especially with the humidity in the States at certain rounds like Budds Creek making things worse.

You can read Justin’s full statement below:

Hey everyone, I wanted to let all of you know what's been going on with me as my performances as of the last few races have been beyond embarrassing. Earlier this year, back at the beginning of Supercross my body started to feel super fatigued and I was not able to recover from race to race. After having some blood work done we found out that the Epstein Bar Virus was active in me, and my numbers were off the charts. So how do you fix EBV, well you rest. Unfortunatly for me, that was never a viable option. How does a fill-in rider take time off when I am trying to prove that I deserve to have a ride in the sport. Let me tell you, you don’t have that as an option. I had to back down my training and practice during the week to basically nothing at all, which is what I did to get through SX. In doing that the EBV number began to come down to moderate levels and my results in SX began to show that. Often in the last half of the SX series I would be on the board in timed practice and we won a couple of heat races with some top five finishes in the main. When the MX series started we knew it would be a struggle because I have been unable to ride any 35 minute motos all year. The only time I've ridden that long is at the races. Having won national motos and an overall, this is no way to be prepared to race the best guys in the world who are able to prepare themselves. Unfortunately, my EBV numbers are back and high once again, which really showed this past weekend in the heat of Budds Creek. I have been trying to manage this sickness all year in an effort to secure a job for next season, as I have to wait until after Ironman this weekend to really start the recovery process which we believe we have a good plan for. I have really enjoyed riding for @teamrmatvmc this year and I hope we can continue the relationship next year, because I know once I get healthy and having a year under my belt with this awesome group of people that I can be a threat next year for podiums and wins. Thanks for listening and I will see some of you this weekend at Ironman. Just know I am doing the best I can with the circumstances I'm dealt with right now. -JB