Bobryshev toughs it out in Indonesia 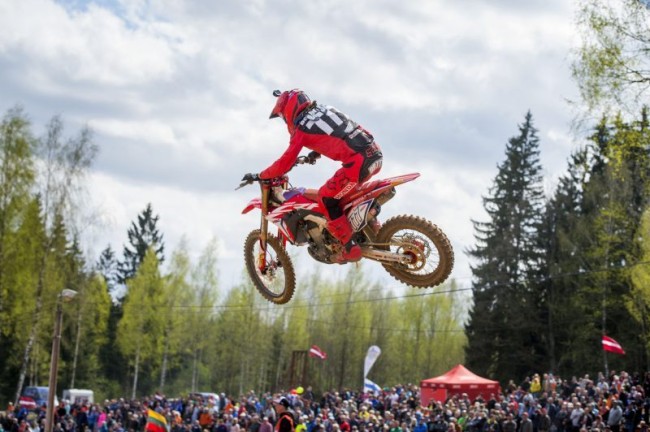 The BOS GP rider suffered a lot this weekend for the second Indonesian MxGP. Six crashes, a bruised knee and a punch on his head didn’t stop him on his way to score important championship points.

Evgeny Bobryshev: « The track was awesome, jumps, elevations were fun to ride but sadly, I never have been comfortable on the track. I tried my best and did get hurt a lot in only two days. I’m happy to come back in Europe safe. It will take me a while to recover this tough Sunday, but i will get ready for Loket, trust me! »

First moto saw Evgeny take a decent start in 15th and quickly get in 10th. But it lasted only 100m before a big crash in the first lap.

Dominique Alleaume, Chief mechanic: « Like yesterday, Evgeny lost the front end in the take off of the big camel jump after the triple. He smashed his knee and his head in the process, but with all the rider following him closely, it could have been worst… »

Evgeny came back in 15th, but with the disqualification of Nagl and Coldenhoff, he get a 13th and entered in the Top 10 of the World Championship !

Between both motos, Evgeny and his wife were worried about the consequence of the crash. Evgeny had pain on knee and shoulder, but the problem was also coming from the head, with a strange feeling.
Nothing serious but the rider knew he had to take care for second moto.

After a second average start, Evgeny came back in 15th, on Coldenhoff’s rear wheel, but one more time, Evgeny crashed hard after the finish line. It was over…
But the BOS GP rider decided courageously to finish the race to get the two points of the 19th position, with blood liking from his front arm…
Strong you said?

Pierrick Paget, Team manager: « we all learned a lot from Evgeny this weekend. Good times or bad times, he’s never letting the team down. He’s a true inspiration and it’s a pleasure to work for him, from the French workshop to the track. Steven Bossard stayed in Toulouse to prepare a new engine, We really hope it will help Evgeny to enter the Top 8 more frequently. He’s definitely able to battle for 5. We didn’t see the best of Evgeny yet. Can’t wait for Loket to come…”

Loket will also be the first time BOS GP line-up his two riders with the return of Jordi Tixier in MXGP!