Best finish of the year for Vaessen at Mantova! 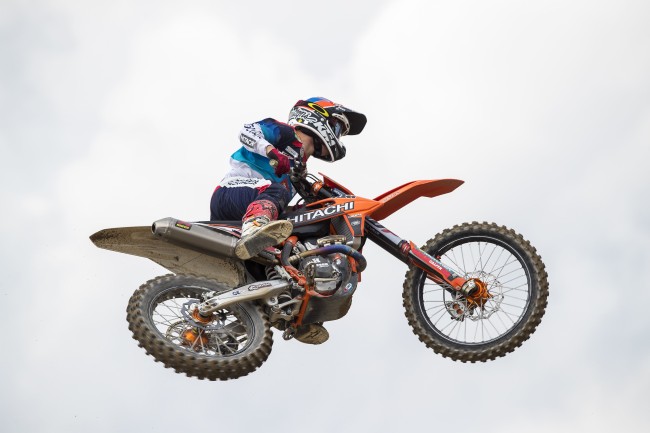 After a four-week break, the Hitachi KTM Fuelled by Milwaukee Team travelled to the fifth round of the FIM Motocross World Championship. They did so, however, a rider short after Conrad Mewse’s wrist injury sustained at Canada Heights the week before meant that Bas Vaessen would be the Team’s sole focus. While Mewse recovered from wrist surgery, Vaessen was operating in increasingly tricky conditions over the weekend as rain came to dominate race day at the sandy Mantova track in Lombardia.

Practice was far from spectacular, but Vaessen’s pace improved throughout Saturday after working hard on set-up and the Dutchman earned himself a 12thplace position, and second KTM, for Sunday’s start. That was the end of the dry weather, however, and Saturday evening’s rain persisted into Sunday, which would challenge the entire field on race day.

Despite the conditions, Vaessen concentrated hard on his lines and made a strong start to sit in the top five after the first lap. Dropping a place by lap two, Vaessen recovered this to grind out a very solid fifth position that, while lonely at times, was a strong ride in very muddy terrain. Fellow KTM rider Jorge Prado took the win. Race two was again a trail of the conditions, but Vaessen was caught up in Ben Watson’s errant start, meaning that the Hitachi KTM Fuelled by Milwaukee rider didn’t replicate his race one start and was having to fight mid-pack in the early stages of the race. Having found himself in eighth, mistakes compounded to mean that he dropped back to 15th by the end of the race – a disappointing end to a very promising meeting. Prado took the race two win to go 1-1 for the fourth time this year.

Bas Vaessen: “We made some good changes on the bike that worked out well. Qualification was okay, I got a good start in the race and was able to keep up well. I had a good start in the first moto and basically rode my own race trying to keep myself on two wheels on the muddy track. Finishing fifth was my best result in two years. In the second moto I struggled when my neighbour rode into the gate and bounced me off balance. However, I managed to get through the first lap quite well. I got a bit too hungry to pass for seventh position and made mistakes I shouldn’t be making. I have got to work on this and look forward to Águeda.”

Team Manager, Roger Magee: “Despite the unfortunate injury last weekend for Conrad Mewse, the Team spirit really shone through today fueled by good, determined riding in all races by Bas Vaessen. The really heavy, unrelenting rainfall during Saturday evening and all-day Sunday made the conditions very demanding on the riders and their bikes. Bas made a good start in race one, only to make a small mistake on the opening lap. He quickly recovered from that and elevated himself to fifth, which he held on to the finish. Naturally, our expectations for the second moto were high, unfortunately at the start Watson hit his adjacent gate causing him to ricochet into Bas’s left arm causing him to lose balance momentarily and lose his momentum to turn one. That said, Bas made a really good job of the first lap and rode well through to mid-race. He then made a few self-inflicted errors in the deteriorating conditions, bringing home his KTM 250 SX-F in 15th, resulting in eighth overall The Team now make the long road trip to Agueda for the GP of Portugal next weekend where hopefully Vaessen’s results will continue to improve.”