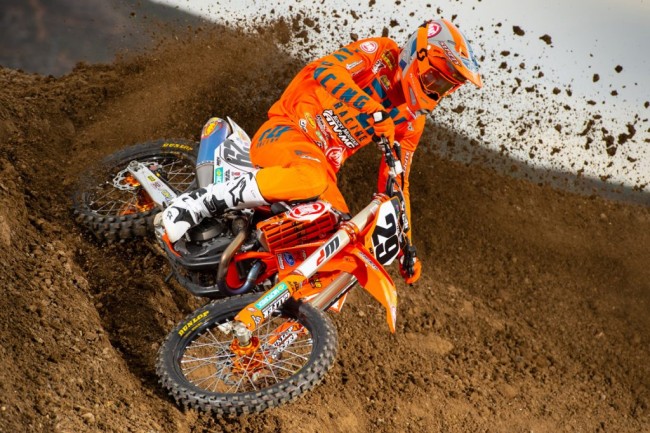 Benny Bloss rode his last race with the Rocky Mountain ATV KTM team at the Monster Energy Cup finishing 7th overall as he begins his search for a ride for 2020.

Injuries unfortunately meant Bloss couldn’t show his potential but the big American is remaining positive he can find something and is vowing to be on the line at A1.

Tom Jacobs caught up with the American version of Ken De Dycker in Vegas.

Benny, you used the communication system tonight, how did you find it?

I thought it was awesome. My team manager was up in the mangers tower talking to me. It was really cool in qualifying because usually I would pull in and figure out where I’m at and what I end to work on, stuff like that. I never had to pull in all day, it was awesome he told me any information I need to know, any lines any jumps that I needed to hit or what position I was in. Then also, if there was a downed rider which was huge, there is a lot of blind jumps on the tracks. I think that will help the safety part of it.

Had you worked with it to before to work out how to use it?

Well, press day yesterday was the first day we had ever tried it and figured we could give it a go today and it was awesome, I’m really glad that I tried it. It was kind of spotty during one of the races but the other ones it was good, he could tell me to take the Joker Lane on this lap or when not to take it.

Unfortunately you got the news you won’t be around with the Rocky ATV KTM next year which is unlucky because your first year was really good then you got injured, what’s your take on it?

It is was it is, there’s not a whole lot I can do about it, basically just go out there and try my hardest. Honestly, right now I don’t have any plans on what I might do for next year but hopefully I’ll be able to figure it out in the next couple of weeks, but either way I’ll be at Anaheim racing my dirt bike whether I pay for it or somebody else does.

Are you trying to put a plan together to go on your own if that’s what’s needed?

I’ve known for about two weeks now. I’m trying to figure out a plan and been talking yo as many people as I can. I want to make sure I do the programme that is right for me and not jump into something that I don’t really want to be a part of, I guess we will see in the next couple of weeks.

Is there something you can do with KTM if you go on your own because you are familiar with the bike?

That’s something I haven’t got to yet, but I love the KTM I have ridden it for the last four years and I think it’s the best motorcycle out there so if I can stay on that bike, even better.

There are so many good riders and so little spots, is it hard to deal with?

Yeah, it’s hard to deal with, but like I said it is what it is. It’s a rough sport, it’s not fun sometimes but we will be back, I believe I will have a better year in 2020 and get back on a good bike, a good ride.

Are there maybe overseas races you can do now that maybe otherwise you wouldn’t have?

Since I’ve been on this team with the oversea races I’ve only been allowed to do one and I’m trying to reach out to some people and try and do as many as those as I can, it’s awesome to be able to go over there, hopefully I can do that, those races are really cool.