Ben Watson interview: I’m going to give it everything this weekend! 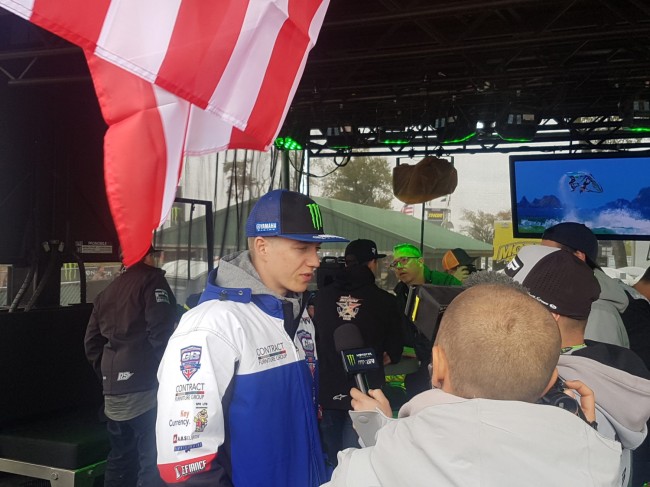 Ben Watson has just had his best season ever in the world championship with fourth overall and now is set to contest his first MXoN and he gets to do it and the legendary Red Bud circuit!

We caught up with Ben to get his thoughts on his year and representing GB this weekend.

Your first season as a factory rider is over, and it was very successful with a brilliant fourth overall in the world, did it exceed your expectations or was that what you were hoping to get?

It exceeded my expectations definitely, I came into the year and had a few goals for myself, one of them of course was to try and get a worl championship podium, the championship was kind of what exceeded expectations for me, I was looking around 6, 7, 8 in that area, then I went to Argentina and went 4-4 and it went from there, I almost maintained it the whole year. I had a drop in Valkenswaard Red sand and then got back onto my level and stayed consistent all year, to come away with fourth I was over the moon.

You were really close to the podium a few times at the start of the year, so how rewarding was that when you finally got to stand up there with the British flag behind you?

I was coming close quite a lot and then I went to Russia and had two consistent rides, I went 3-6 which actually I didn’t really deserve the podium there like I did in some of the other races. I just put myself in that position and gave myself the opportunity to get a podium there and did it, that was a day I will never forget.

Did that give you a boost of confidence that you proved you were a rider of that talent and that ability to be there?

Yeah, I was coming close quite a lot and then at times I would get a fourth or a third and not have a very good second race and end fourth overall, I think I was fourth overall six times throughout the season and it’s not easy. I finished 4-4 in Turkey and was fifth overall! I was consistent but sometimes things didn’t go in my favour for the overall. Fourth overall I have to be really happy with.

You made the move to the 2019 near the end of the season, do you feel comfortable on that now?

It was difficult to get used too, the whole bike was completely new for me, the chassis and the engine is different so it wasn’t an easy transition to make. But we did quite a lot of testing and did what we could to be as good as we could as quickly as possible but it’s never easy to go from a bike you have been riding all year. We did the best we could and right now we have it going really good.

Next season are you looking at adjusting your goals and I guess a GP win?

Yeah I am definitely going to set some new goals, I’m going to set them high but not put any pressure on myself. If things don’t go good they don’t go good, things happen for a reason, I will go and give 100% for every race and every training session and what happens happens I will enjoy it again. I am living in. Belgium again on the same program with Jacky Vimond, we will change a few things to make it a bit more enjoyable and try and stay away from the bad weather as much as we can, it is going to be good.

Moving unto the MXoN here at Red Bud, it’s every rider’s dream to represent their country at the MXoN what’s it like to get the call, you were close last year but this year you got it and I don’t think anyone can deny you the opportunity.

Last year was difficult because I was putting in some good results at the end of the year near where I belong. Tommy and Max were doing good and so was Dean so I think Mark had a difficult decision for the 250 rider and I don’t think he wanted to take risks. I was not standing out at all and Tommy had some good results in MXGP and has performed on a 250 before, I was not down about it, I completely understood and waited my time.

A lot of people said would earn my position next year and I think I did, I had a really solid year. The 250 pick was set early on and it’s really neck to have that, I am just going to give it everything this weekend!

The atmosphere is really building today the fans are hollering already! How are you feeling about it all now?

I am actually quite relaxed, I feel less pressure than in the world championship because I am fighting for an end result in GPs but here it’s just one weekend, it’s a one-off and I am just going to give my  everything and what happens, happens. The track is looking a bit wet, it looks a sandy track. Everything is going good so far and I am really enjoying it and just do what I’ve done this season.

You have similar competition really to MX2 maybe just swapping Jonass out and putting Plessinger in, are you looking forward to how you compare to him, I guess there’s no reason why you can’t be fighting for the top three?

Yeah you take Jonass and Olsen out and add people like Ferrandis and Plessinger so it’s going to be cool to be riding with a few new riders. I’m not going to say I’m going to be on the podium or I want to win. I just want to do what I can, I don’t want to put any pressure on myself I just want to enjoy it.

Yeah I am good friends with Max and Tommy, we all get on really well and I have really enjoyed the week so far. We are going to have a good weekend and enjoy it.