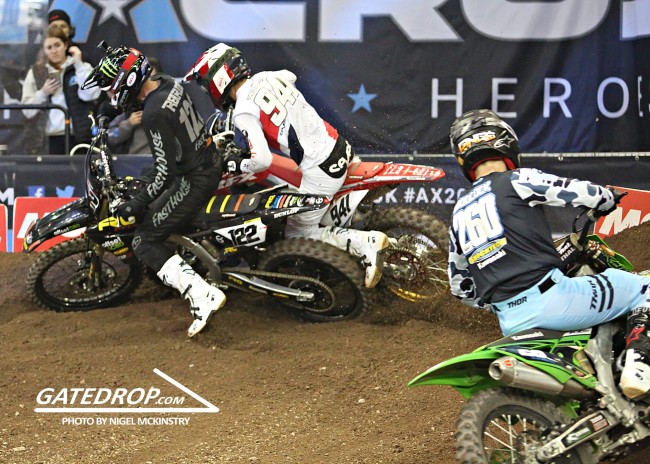 The track is being run in the opposite direction in Belfast for round two of the UK Arenacross championship and while the circuit seemed to flow better, it meant a few of the pro riders hitting the dirt!

Soubeyras and Ramette both went too close to the tuff block on the rhythm section and went down in their respective sessions, with local men Edmonds and Barr both taking a hard hit in the whoops. Barr pulled out of the session but should be behind the gate tonight.

Things unfortunately went worse for Jordan Keogh, the Irishman rode excellent last night but ended up in hospital after a a crash in the first session this morning with a possible broken ankle. Joe Clayton also had a lucky escape after crashing on the finish line jump and landing off the side of the track, but said he was uninjured thanks to landing on some tuff blocks!

Julien LeBeau edged Soubeyras and last night’s winner Hsu in the Lites class with Ramette putting his crash behind him to go quickest from Le Francois and Reardon in the 450 division.

Ben Clayton took the rookie class win from Osterman while James Mackrel easily won the first moto in the All-Ireland cup rather easily with no Jordan Keogh on the gate. Drew Stock won the 65 class with Raife Broadley finally getting the best of local man Charlie Irwin to win the supermini division.

With the slippery surface still making the corners tricky, precision and good starts will be the name of the game tonight.