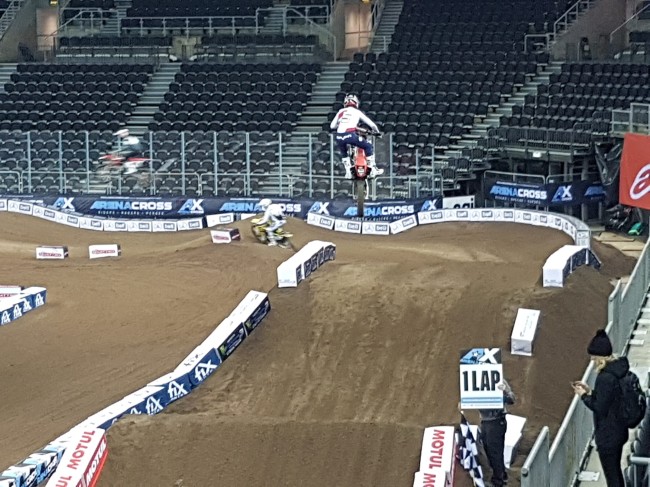 The track for the Belfast arenacross looked great before the bikes even hit the track this morning, with the usually damp dirt actually dry, although a bit silty on top.

The circuit should remain in decent condition for the night show, although the soft berms and some acceleration bumps out of a slick penultimate turn made an extra challenge on the track alongside the man-made obstacles during practice.

Thomas Ramette looked great, especially in the whoops in the 450 class as was Dan  Reardon with the duo going 1-2 in qualifying. Also impressive was Graeme Irwin who was 8th but on the pace of indoor specialists like Ashley Greedy and Jack Brunell, not bad for a guy who raced short circuits last season! Irwin looked comfortable and he should be in thick of the battle tonight.

In the Lites class it was number one plate holder, Cedric Soubeyras leading away with some impressive corner speed but local man Martin Barr, making his debut on the BRT KTM, looked good as well and was fourth quickest ride behind former MX2 World Championship rider Brian Hsu, who should also be one to watch tonight even if he is a bit banged up tonight after a big crash in Dortmund last weekend. Arenacross specialist, Joe Clayton, was fifth and very much on the pace for tonight.

The highlight of the opening races early this afternoon was the All-Ireland race that saw James Mackrel and Jordan Keogh go at it all race with Mackrel just taking the chequered flag ahead of his rival Keough. The 85 class had Charlie Irwin taking the win in an impressive ride passing the race leader Raife Broadley and holding strong despite the pressure behind him. German talent Carl Osterman won the Rookies cup from Ben Clayton and long-time leader Axel Boldrini, who after a mistake in the whoops went from first to third. Young Drew Stock took the win in the 65cc race.

It all points towards some good racing tonight, and, with the track looking tough to pass on, some bar banging is looked very likely in the turns!