Battle of the Meara brothers at Tandragee! 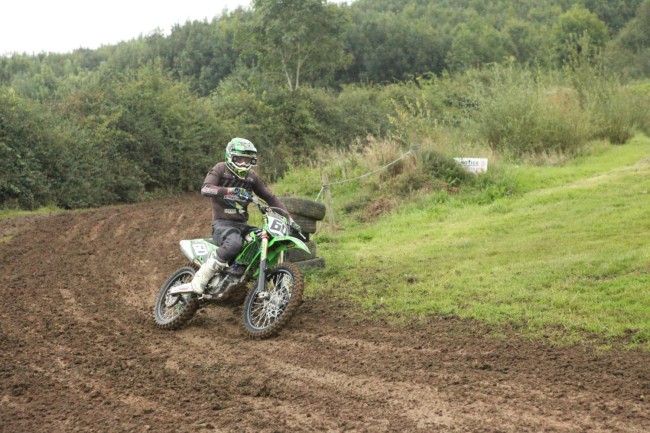 John Meara edged out brother Jason Meara in a nail-biting final moto to decided the MX1 overall win at Tandragee for round five of the Ulster championship.

Pole-man John went down in the first turn of race one with Jason finding himself in the lead after a mistake but early race leader Jake Sheridan. But John was the fastest man on the track and the Watt Kawasaki man worked his way into second and set his sights on catching his younger brother!

John began inching up on Jason and, just when you thought he was getting into position to make a pass, he slid off into the trackside banners! It transpired John was so focussed on winning he forgot about the track changes made for the day!

So Jason took the win in race one but John hit back to take the holeshot and dominate race two. Jason meanwhile had a tougher race with a poor start and then going over a berm leaving the Phoenix Tools Kawasaki rider putting in a hard charge in the last few laps to pass a very impressive Jay McCrum for second with a couple of laps to go, keeping his overall hopes alive.

Race three was the head-to-head duel everyone wanted to see. John nailed the holeshot only for Jason to go around the outside of him take the lead just two turns later! But John wasn’t having it and immediately hit back with an aggressive move of his own, forcing his way up the inside jut a couple of turns after Jason’s move to retake the lead and set the pace.

Jason sat there and figured out the rhythm and, after a couple of laps, started inching up on John again and looking the best he had on the bike all day. With a couple of laps to go Jason was right on the rear wheel and scouting out passing attempts but a couple of bobbles gave John a small gap again, and that ultimately was enough for John Meara to take a brilliant victory under big pressure to win the overall and all but secure the 2019 MX1 Ulster championship.

MX2 was also a battle. Glenn McCormick, Jake Sheridan and Jordan Keough were all going at throughout the day but it was McCormick who took the overall with three race hard-fought race wins despite from a serious late-race charge by Sheridan in the final race to make the move on McCormick for the third moto win.

Grade B MX2 saw the continuing dominance of Conor Mullan who despite a bad start in race one was able to win all three motos as he gets ready for Grada A next season. In MX1 it was a smooth Aaron Ashton who took the overall with three easy wins as the his rivals fought hard behind him.