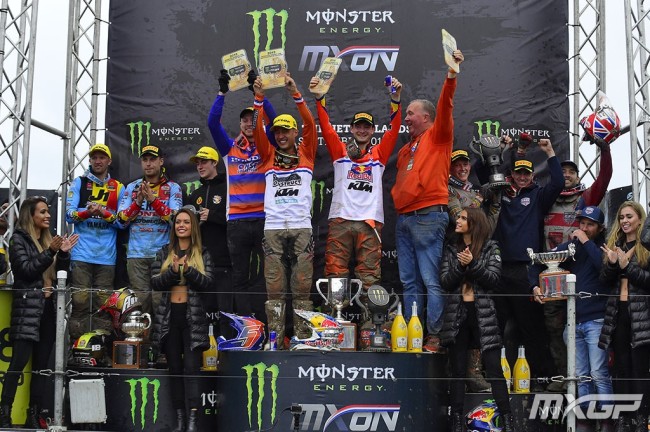 It was one of the most dramatic MXoN in recent memory with battles, DNF’s and crashes all combined with the heavy rain to make a memorable event at a historic circuit as the Dutch won the event for the first time ever!

Here are five things that really caught the attention:

Tim Gajser: What a great ride by Tim Gajser in Assen! Not known for his sand skills, Gajser held off a rapid Herlings in race one then was all over Coldenhoff in race two going for his second outright moto win of the day even though he already had the MXGP class win in the bag. It hadn’t been a great end to the MXGP season but Gajser seemed to get his focus back for Assen and showed why he is the 2019 MXGP world champ, he also became the first Slovenian ride to win a moto at the MXON.

Herlings not winning: He was the fastest rider over the weekend when he found clear track, but Herlings three motos results were 5-2-4 with not a moto win in three attempts. Terrible starts and many crashes left Herlings’ results not what was expected, yet Holland still romped away with the win showing just how strong they were as a team.

Bad luck and issues for everyone! Team USA hit bad luck first when Anderson and Cooper collided but after that the rest of the top teams had their own issues! Nathan Watson was forced out of moto one for team GB with a fried clutch, France lost two results and a podium with a double DNF, Kevin Strijbos hit the deck in both races and Jago Geerts had a DNF for Belgium and as mentioned even Holland had to deal with a not fully fit or in-form Jeffrey Herlings crashing and not getting the results they thought they would be need to bank on.

Super Estonia: What a performance from the Estonians! Fourth overall was a brilliant achievement with Harri Kullas leading the way with two great rides for fourth overall in his class ahead of Osborne and Tixier. A brave Tanel Leok rode with a torn ACL in his 19th MXDN and Prit Ratsep did his job on the 250. For such a small country to beat some of the leading Nations is a superb achievement.

Saving the track after the B final: After unbelievably heavy rain overnight, the circuit at Assen looked almost unraceable during the B final! But the track crew got busy in the break and managed to fix the circuit up so that, although soft and wet, the riders could actually race – even if some sections where one lined. However, with two of the three races coming down to the last lap and the top 250s still capable of getting into the top ten, the track was about as good as could be expected, and, unlike the last two wet MXoNs the paddock was mud free! While some complained about the track the truth is there was no better facility to cope with the bad weather than Assen.