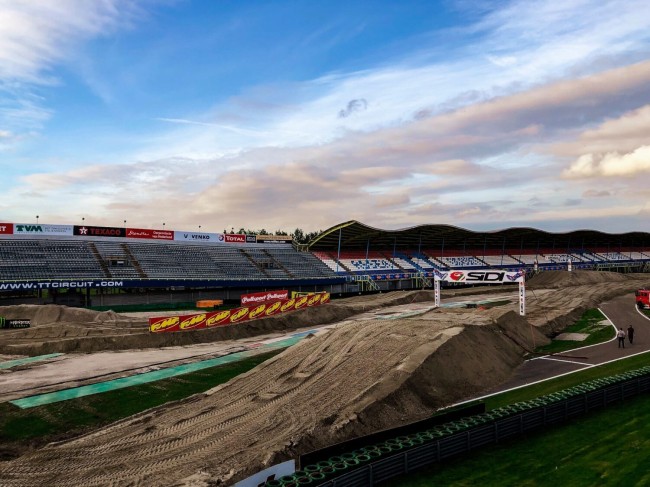 Andy McKinstry: Predictions for the Motocross Des Nations are hard to call as starts are so important. Also, this event is known for throwing up a lot of surprises.

Let’s start with the MXGP winner, even though Herlings has never went 1-1 at the MXoN before, I feel like he’s got enough in the bag to win the MXGP class this weekend in Assen. Since making his return to racing after his injuries, he hasn’t needed too much time to get back up to pace and Assen should suit him even better. I do see Jorge Prado challenging Herlings though, Prado has so much technique and has good memories from Assen at a track he goes well at. Other riders who could challenge in the MXGP class are Jeremy Seewer, Tim Gajser, Arminas Jasikonis, Jeremy Van Horebeek and Gautier Paulin who always steps up at the MXoN but I can’t see any of them trouble Herlings.

The MX2 class is a bit harder to call because starts are so important. I’ve no doubt that Jago Geerts and Calvin Vlaanderen will probably be the two quickest guys in the class and especially when the track gets rough but starts aren’t a strong point for them both. Justin Cooper is a very good starter so I can see him benefiting from that and finishing in the top three of the class at least. Due to his strong sand riding, I’ll go with Jago Geerts to win the MX2 class but I’m not overally confident on that one.

Remember how good Glenn Coldenhoff performed at RedBud last year? I’m backing him to do well at Assen again this weekend. I can see him winning the open class, especially with the way he’s been riding lately, superb! Other threats in the open class are Pauls Jonass, Zach Osborne, Kevin Strijbos but I expect Coldenhoff to do the business.

My Nations winner pretty much picks itself as I’ve went with Herlings and Coldenhoff to win their individual classes. If they manage to do that it would take a disaster for the Dutch not to win the event so I’ll go with them.

You just never know with the Motocross Des Nations though, there’s always a twist that you don’t expect!

Jonathan McCready: There is no doubt Holland are the overwhelming favourites but anything can happen at the MXoN and even one first turn crash can set the cat amongst pigeons with a few hungry countries ready to pounce on any issues for the Dutch.

Holland of course are the best team on paper and are at home, but with a huge crowd expected and the king of Holland in attendance, there will be huge pressure – can they cope? I think, as long as nothing major goes wrong regarding injury, mechanicals or crashes the Dutch should win the MXoN for the first time ever – and the scenes could be epic!

Chasing them are a host of teams, who, if things go their way, could not only be on the podium but be darkhorses for the win.

The USA are doing all they can to be more competitive this year and should be in with a shout after two weeks in the soft stuff, Ice One racing set-up advice and Jonass and Jasikonis showing them how to ride in the sand. They have the riders and ideal preparation to be at least podium contenders, especially with their starts.

France are the defending champions but it might be one year too far for a team missing essentially four potential team riders with no Musquin, Ferrandis or Febvre plus the bizarre exclusion of initial pick Vialle.

They do however have a strong team but like a lot of teams the starts will be key.

For me Belgium could pip them for the podium if Jago Geerts brings his A game and gets good starts. Geerts is key for Belgium this year as he has the potential to win MX2 and that would give a great platform for the in-form Van Horebeek and a Wilvo Yamaha armed Kevin Strijbos, who always rides great at the Nations to get the scores to put Belgium on the box.

Then there is team GB, possibly the most unknown of the leading teams, but if they all perform on top of their game should be right in the mix for a podium. Shaun Simpson however probably has the most pressure, we all know what he can do in the sand but his form recently hasn’t been close to that level, if he can turn it around it would be a big tonic for both Sterry and Watson who, despite being MXoN rookies, should be able to get the results needed to keep the Brits in contention come the third moto.

Individually Jeffrey Herlings will be favourite for MXGP but all eyes will be on Jorge Prado who has the talent to challenge the Dutchman and will want to give him something to think about over the winter!

In MX2 Jago Geerts easily has the speed to win but Justin Cooper’s starts might help him get the job done if Geerts is buried in the pack, although you can’t count out Calvin Vlaanderen who has been in great form recently and getting the starts. Maxime Renaux is fast in the sand but like Geerts his starts aren’t usually that consistent and it’s a similar story for Thomas Kjer Olsen. With the 450s in the class and a number of riders who can win starts will be crucial in MX2.

In the open class it’s hard to look past Glenn Coldenhoff on current form but Jonass (if Latvia qualify), Osborne and even Strijbos could be contenders if they have a great day.