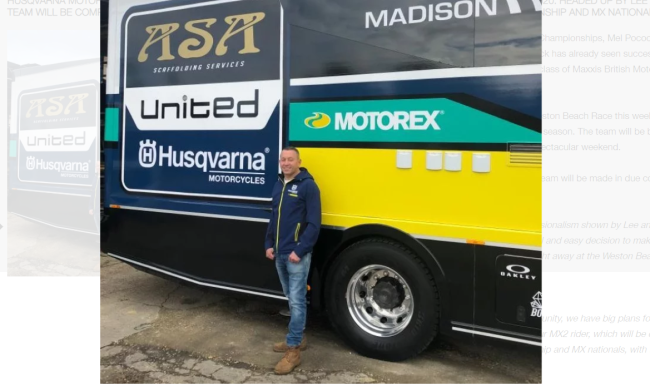 HUSQVARNA MOTORCYCLES UK ARE PLEASED TO WELCOME ASA UNITED TO THEIR MOTOCROSS TEAM LINE UP IN 2020. HEADED UP BY LEE TOLAN, THE TEAM WILL BE COMPETING ON FC 250 AND FC 450 MACHINERY IN THE 2020 MAXXIS BRITISH MOTOCROSS CHAMPIONSHIP AND MX NATIONALS.

Following a successful debut in the MX1 class of the 2019 Maxxis British Championships, Mel Pocock will remain with the team for 2020 and will be compete on the FC 450 machine. Pocock has already seen success with Husqvarna Motorcycles in 2018 when he finished third overall in the MX2 class of Maxxis British Motocross Championship.

Pocock will be riding an ASA United Husqvarna Motorcycles FE 450 at Weston Beach Race this weekend before the team plans an intense programme of winter training ahead of the 2020 season. The team will be based on the promenade and fans are encouraged to see the team in action over the spectacular weekend.

Further rider announcements for the ASA United Husqvarna Motorcycles team will be made in due course.

Matt Walker – Managing Director: Husqvarna Motorcycles UK
“At Husqvarna Motorcycles we’ve been impressed with the level of professionalism shown by Lee and his team throughout 2019, so offering support to the ASA United team was a logical and easy decision to make. Mel’s track record speaks for itself and it’s great to see the partnership in action straight away at the Weston Beach Race – we wish the team the best of luck for Weston and the 2020 season.”

Lee Tolan – Team Principal: ASA United Husqvarna
“I would like to thank Husqvarna Motorcycles UK for giving me this opportunity, we have big plans for 2020 and look forward to this partnership. Our riders will be Mel Pocock and a furthur MX2 rider, which will be confirmed shortly. We will be competing in the Maxxis British Motocross Championship and MX nationals, with the view to doing some European rounds with both riders.”