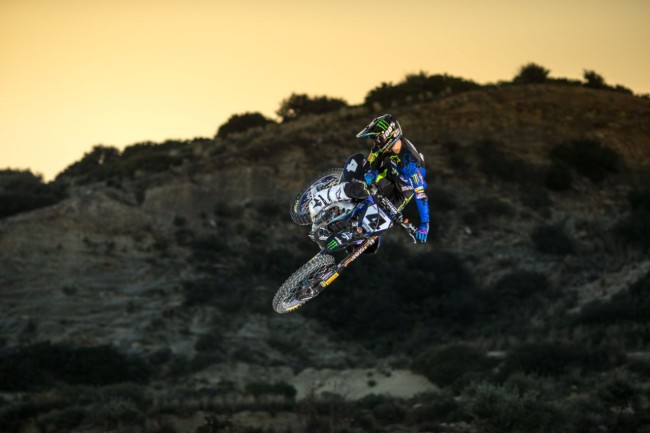 Arnaud Tonus spent lockdown back home in Switzerland but is now back in the Netherlands putting in the laps at the sand tracks.

“Happy to be back in Holland and in the sand. The body is suffering a little bit at the moment so it’ll take a few days to get used to it (laughs)”, Tonus told Paul Malin and Lisa Leyland.

The first round of the MXGP World Championship took place at Matterley Basin and despite a lot of rain, the track was pretty much perfect on Sunday. Tonus was happy with how the track turned out on Sunday.

“We got really lucky actually. I don’t think anybody expected such good conditions for that time of the year in England, we know how the weather usually is there but for race day it was great conditions, the track was perfect. We had some storms but overall it was really nice to ride. The track can take some water, it was pretty amazing to see all the problems we had on Saturday we had with the storm but yet the track on Sunday was close to perfect”.

A week later, the MXGP riders went to Valkenswaard which were totally different conditions from Matterley Basin, the rain made the track very heavy and rough. Not the easiest of tracks to be battling with a thumb injury.

“I was still dealing with a thumb injury. I didn’t ride in between the two GP’s, the rain slowed down the pace a bit and physically it’s a little easier I would say. But the track, everything just got super rutty and rough while raining at the same time. The conditions were super difficult, For myself, it was alright but I crashed with Pauls (Jonass), it was a bit of a weird move from him, he came back from the outside to my front wheel so from there I had to come from way back. I think I got back up to fifteenth or something which isn’t what I want but at least it was points. Now I’m just looking forward to the rest of the season”.

After Valkenswaard, Tonus got an injection on his thumb and is now nearly 100% – the break in the MXGP calendar wasn’t bad timing for the Swiss talent.

“After Valkenswaard I made the decision to get an injection in it because before that I wasn’t sure if it was going to heal by itself or not. After Valkenswaard with the time out we had, I got the injection so it helped quite a lot to recover. Now I am close to 100% to be honest, I just miss a little bit of power but the mobility and everything is fine. I am pretty happy with it”.

In 2019, the Yamaha rider had a great season getting plenty of podiums and when we get back underway for the 2020 season he wants the same kind of results.

“Yeah, it was amazing to come back in that shape. I struggled a little bit the first few rounds but since Portugal I was feeling really good physically and mentally too. I felt free on the bike and the setup was working really good for me. It kind of clicked for me from there so I look forward to this kind of riding. I need some good starts and then to ride out in front, that’s the goal for sure”, concluded Tonus.

You can watch the full studio show with Tonus here: