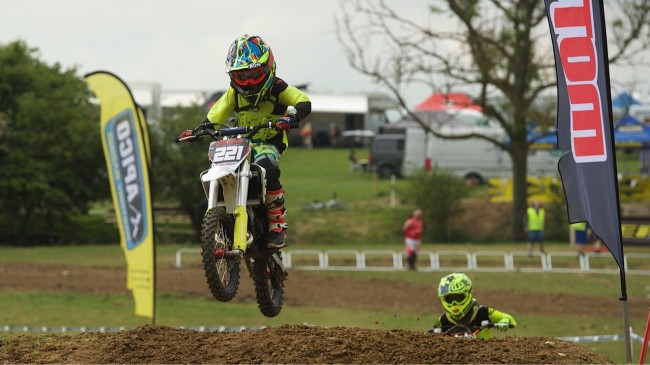 Thanks to its opening round success, whereby it extended its youth classes to include Auto and 65cc, the Apico Two-Stroke Festival will continue to cater for the youngest members of the motocross racing fraternity at its upcoming second and third rounds of the 2019 series

Next up is the round at Iron Works Moto Park, Redcar over the weekend of the 3rd and 4th of August. The Festival will run classes suitable for riders aged from six year, through all age groups, right up to those for whom ‘age is just a number’ … which makes it a great event for the families who have premix-loving racers across multiple generations, as they’ll all be welcomed.

All youth riders will be presented with a trophy at Iron Works, and series sponsor Apico is again offering an incredible opportunity to one lucky rider in the 85cc class, with an Apico Factory Racing sponsorship package for 2020 to the tune of £5000. If rider support continues to grow for the Auto and 65cc groups, the promoter has outlined that a similar incentive could be made available to cover these sectors too.

Sam Atkinson was the rider to catch in the BW85 class at the opening round at Sellindge, Kent.  He took five wins from hard-chasing Ben Pratt in second and Ezra Blackwell in third. Jaygo Beasty rode consistently throughout the weekend, and Daniel Wood and Charlie Piddock completed the top six. Round 1 podium finishers in the SW85 class were Kyron Carron in the top spot, Ryan Waggot in second and Charlie Hucklebridge third. But, not far behind were Seth Hughes, Hannah Smye and Harry Challis.

The 65cc race pack didn’t let up for a single second. Archy Atkinson and Austin Beasty impressed the crowd with their race skills, which took them to the top two steps of the podium, with Marley Ray Tupper in third. Harason Baum finished fourth and Lawson Peedle fifth. Finally, the pocket rocket Autos kept the racing scarily-quick and fresh. Tyler Rogers and Charlie Crampton shared race wins with Rogers finishing just five points ahead of Crampton after five tough handlebar-bashing races. Henry Lewis finished a respectable third, with Sonny Bixby running a solid race to take fourth overall, in front of Sam Verbeeten and William Brown.

Entries are now live now – details of how to enter are on the Festival’s website – www.2strokefestival.com.