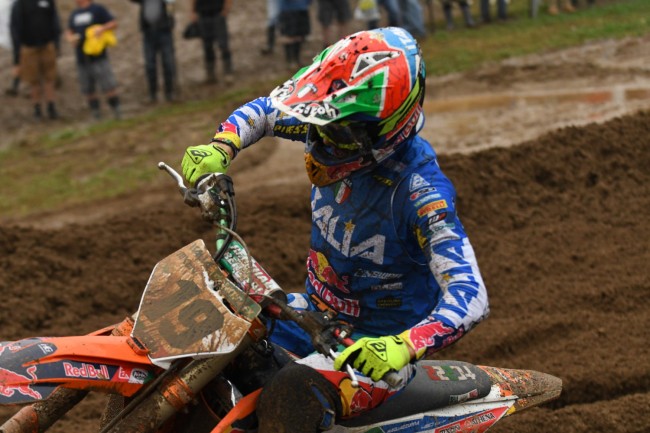 It was a good weekend for Tony Cairoli who made the podium with Italy and won the qualifying race on Saturday.

But, without a first turn crash in race one and goggle issues in race two on Sunday, Italy could have been going home MXoN champions!

Cairoli, despite his injury at Imola, and a difficult end to the GP season, the Italian showed he still had the fight in him just one week later and it was almost enough, along with his teammates, Lupino and Cervillen to take the win!

We caught with the nine-time world champion to discuss his day.

A good performance today but that last moto, no goggles, your eyes looked sore and it seemed to hurt your progress halfway through?

Yeah, we are a little bit disappointed because the first moto I throw away with a crash is the start, I almost had the holeshot and could easily ride the top three, I finished sixth. In the second moto we didn’t really have good communication with the team, I was in the back of Lupino and he didn’t see it was me behind him and I was without goggles. He didn’t let me by so I couldn’t get a rhythm and then Paulin passed me and yeah, I lost the race, the Nations.

It’s okay, because after last weekend we didn’t really know if we could come here after the crash and the injury and also Lupino so we are happy and satisfied after the weekend.

Your qualifying moto yesterday was really impressive,  I was talking to American fans, they didn’t really know who you were or your age, but by the end they were telling their friends to watch how fast you were going, is it nice to show your speed and ability in front of the US fans?

I don’t really care what people think, I know I can go fast, I know what I need to work on but I really appreciate the fans here is America, it was amazing all week. It feels like Europe a little bit with the atmosphere, so thanks everybody for coming out.

Next season, for the world championship are you going to do anything different this winter to go after Herlings?

For sure we have something to change with our preparation, we know where to work and we will work very hard to get my next title.