Anderson, Wilson and Osborne on their Supercross return 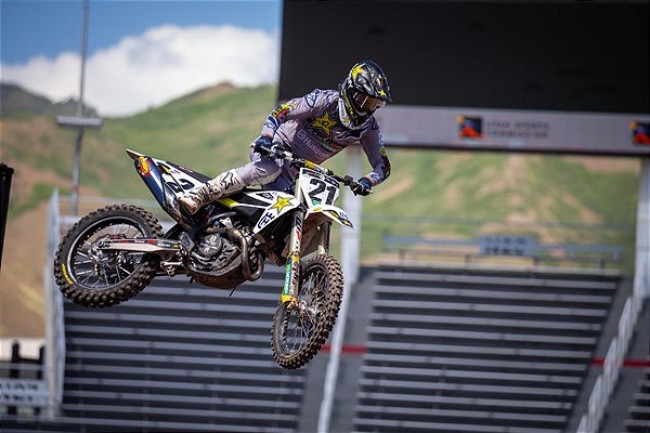 Decrease Font Size Increase Font Size Font size Print Send
The 2020 AMA Supercross World Championship Series returned to racing on Sunday with Round 11 taking place inside a fan-less Rice-Eccles Stadium in Salt Lake City, Utah. Kicking off the first of seven final rounds, Rockstar Energy Husqvarna Factory Racing teammates Jason Anderson and Zach Osborne battled their way to fourth and fifth-place finishes, respectively, in the 450SX class; while 250SX East rider Jalek Swoll earned his best finish of the season with seventh.
450SX
Qualifying seventh earlier in the day, Anderson lined up in 450SX Heat 2 where he began just outside the top-10. He diligently worked his way through the field to secure a fourth-place transfer position. In the Main Event, Anderson didn’t get off to the best start as he rounded the opening lap in 13th. He put his head down and charged early on to bring himself inside the top-five by the halfway point. He continued to push in the final laps to ultimately secure a fourth-place finish in the first race back.
“My day went pretty decent,” Anderson said. “I got a bad start in the Main and ended up fourth but all-in-all, I feel like I rode pretty well all day and was able to make some headway as we work our way into the next six rounds here in Salt Lake City.”
Osborne, who utilized the break in racing to continue healing injuries sustained earlier this season, had a solid performance in his first race back from injury. In 450SX Heat 1, he got off to a sixth-place start and worked his way into fifth by lap three. He fought through the checkers to earn a fourth-place transfer spot. In the Main Event, Osborne grabbed a top-10 start and he chipped away at the competition to bring himself inside the top five halfway through. He clicked it up a notch and moved into fourth with 10 laps to go and after battling his teammate, Anderson, in the final laps Osborne was able to secure a fifth-place finish.
“It was a positive weekend overall,” Osborne said. “It was my first race back from injury so it was really good for me to go out there and get comfortable in practice. I feel really comfortable on the dirt here in Salt Lake, which is something that’s not typically my forte but it’s coming around for me. I’m happy with where I’m at fitness-wise and with my bike, so I’m looking forward to the next few races here – onwards and upwards.”

Dean Wilson had a great start to the weekend, where he qualified fastest in the first timed session and secured fifth overall in combined qualifying times. He grabbed a fourth-place start in 450SX Heat 2 and battled for a top-five position throughout the 10-lap race, ultimately finishing sixth. In the Main, Wilson began in 14th and worked his way up to 10th by lap 12. From there, he maintained a solid pace to secure a 10th place finish in the Main Event.

“I’m not super pumped with how the day went but definitely taking a few positives from it including pole position in the first qualifier,” Wilson said. “I rode a bit tight in all my races and made some little mistakes that cost me. I didn’t get a great start in the Main so I was in the middle of the chaos but I’m happy to get that one out of the way, bring home 10th and hopefully get better from here on out.”

250SX East
Jalek Swoll got off to a top-five start in 250SX Heat 1 and he maintained a solid top-five running to secure a fifth-place transfer into the Main Event. In the Main, Swoll grabbed another great start as he positioned himself inside the top-five on the opening lap. He made a couple of mistakes that dropped him back to seventh and he fought hard to finish strong and secure his best finish of the season with seventh.

“This was the best finish for me and that was the goal – to come back better than I was before the break in racing,”

Swoll said. “Riding-wise I actually felt good, I just missed a couple things on the track that cost me some time but if I polish those things up I’d be right up there with those guys.”