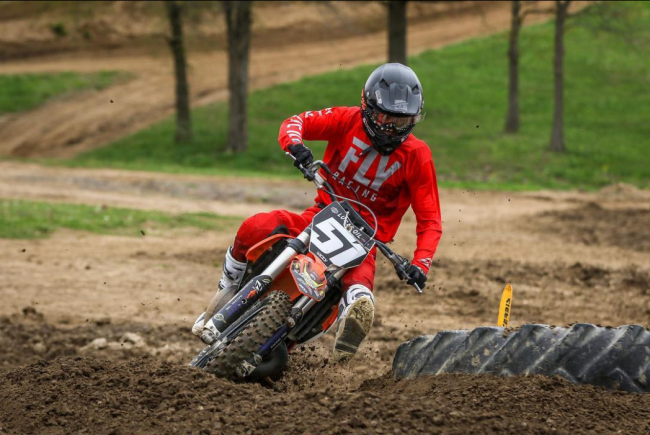 American rider, Ezra Hastings has recently made the trip to the UK to race the Maxxis British Championship at Canada Heights this weekend in the MX2 class.

Hastings is a previous winner at Loretta Lynn as he won the event on an 450cc and will race the same event later in the year on his 250cc.

This weekend, Hastings has been given the opportunity to race a team green Kawasaki and it’ll be his first race outside the States so it’s an exciting time and a new experience for the American. The race will give the American an opportunity to race with some World Championship riders such as Conrad Mewse, Bas Vaessen, Dylan Walsh and Alvin Ostlund.

In terms of his outdoor plans back home in the US, he will race the Amateur National at Loretta Lynns and all being well could contest a few AMA Pro Motocross rounds.

Ezra Hastings: “I got the opportunity to race the British Championship through one of my sponsors here in America. Malcolm Currie and Chay Ellis with Advanced Plastering Inc. They grew up in Britain with Jon Barfoot. Malcolm told me that he used to race back in the day so they wanted to fly Jon here to America to train me for a few weeks. We got along great, not long after Jon went back to Britain he called me and invited me to come race the British championship. I’ve never been out of the states so I’m really looking forward to this race!

“I’m honestly not sure what to expect at the race. I’ve never raced with any of these guys so it’s hard to say how I’ll finish. I would like to finish up front, I’d be happy with top 5. If everything goes good I would definitely like to come back and race more of the British championship rounds. I’d like to thank my sponsors for helping me out! My Dad and my brother Josh, Advanced Plastering Inc, Scott Plessinger, Hoosier Tire, stebbing cars, zero nine graphics, no toil, odi grips, Fly racing, Sunstar, braking breaks, Mathismotomartamsoilsynthetics, motoXtremes, SSR, TomZontRacing”.

Jeff Perrett: “I got a facebook message from Jon Barfoot asking me if I’d be interested in helping out an American rider who wanted to come over and race a British championship round. I’ve know Jon a long time and his judgement on riders, because he’s a bloody good rider himself. It’s also good to have riders from a different country come over and find out what the British MX scene is like. Jon gave me more detail on Ezra and we have a spare bike kicking around so that was it. Sorted. Ezra will be racing a stock bike, mine in actually fact, but he’s not worried about that. He just wants to come over on a bit of a holiday and see what it’s all about. If he does well, then great. I’m just looking to forward to seeing what he’s all about and getting to know the kid. He’s obviously got some go about him to be able to win at Loretta Lynn’s. Let’s hope it all goes well for him, he has fun, stays safe, is made to feel welcome and goes home with a positive opinion on the UK.”