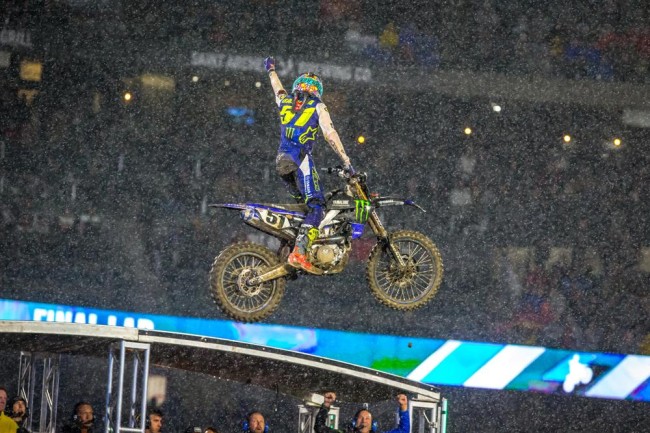 A brilliant Anaheim kicked off the supercross season but possibly revealed more questions than answers in the SoCal rain!

We look at the biggest stories from the event here:

Barcia’s return to the top –  Just over a year ago Justin Barcia had no factory ride and now he leads the points after a mature win at Anaheim one! Barcia didn’t rush things when he was in third and stayed with the surprise leading duo of Dean Wilson and Malcolm Stewart, but when Stewart went down, Barcia went into attack mode and made the move on Wilson and getting a lead he could control. They were very few wild moments from the former wild child on a slick track and this was a huge win for his confidence. Barcia was fast all day dry or wet and this performance and emotional control underlines his pre-race press conference statement that he wanted to be a title contender – right now he is.

Unlikely leaders – Wilson and Stewart – Of all the expectations and predictions coming into Anaheim, I’m not sure many would have predicted Dean Wilson and Malcolm Stewart battling for the lead! Wilson a privateer who has now been upgraded to a factory bike, thanks to Zach Osborne’s injury, led for 15 minutes but unfortunately just missed the podium when Tomac got him right at the end. But Wilson showed great speed all day and seems very focused to show he has the stuff in supercross and reward his personal sponsors who have backed him to get to the races.

Malcolm Stewart has shown speed for a long time but not necessarily for a full main event, but his fitness seems to have really improved this off-season and the younger Stewart was a real contender for the win until he slid off going for the pass on Wilson. Stewart had been reportedly quick in the off-season but race-time is different and with the pressure on and his first ever A1, Stewart showed that 2019 might be his break-out year in the premier class.

What happened Anderson? Jason Anderson was big talking point after Anaheim after starting in third then dropping all the way to 14th. Anderson wasn’t jumping the two big doubles and couldn’t seem to get his rhythm, then admitted to feeling overwhelmed after the event. There were unconfirmed rumours he was riding with an injured wrist or that he is struggling to get a comfortable set-up on the new Husky but whatever the issue (a heavy number one plate?) Anderson will have to rebound quickly after his presumed title challengers, aside from Musquin, ended up o the podium. With a guaranteed dry round two indoors at Glendale this weekend we might get a better gauge of wether round one was just an off form Anderson or if there are bigger problems for the defending champion. But the pressure is even higher now for the defending champ.

Webb’s pace! Cooper Webb maybe had the ride of the night at Anaheim after going down in turn one and coming all the way back to fifth and having the fastest lap time of the night – a second quicker that anyone else! Webb was doing the two big doubles even when it was sketchy and also looked to have his corners dialled. This was the Webb everyone expected when he moved up initially, but will he be able to repeat on a dry track this weekend and validate his result from Anaheim and his move to KTM?