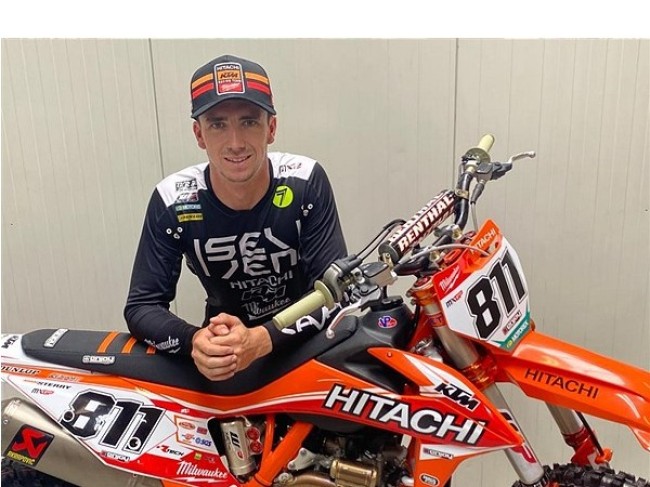 Adam Sterry has been signed by Roger Magee’s Hitachi KTM fuelled by Milwaukee team to compete in the soon to be resumed 2020 MXGP championship. Having competed in the first two rounds in Spring under the JD Gunnex banner, Sterry unexpectedly parted company with the Czech team at the start of July and faced an uncertain summer. Unable to watch a rider with such talent and potential spend a season on the sidelines, Magee quickly put together a deal that sees Sterry head to Latvia with the teams’ KTM 450 SX-F, the same machine that he started the season on with his former team.

The deal will also include Sterry and the team fighting for the ACU British Motocross MX1 crown when the series starts at the double header at Foxhills over the August Bank Holiday weekend. The addition of the 2016 MX2 champ means that the Hitachi KTM fuelled by Milwaukee squad will now fight on all a multitude of fronts and classes across MXGP, EMX and the British Championship – with Sterry joining MX2 riders Conrad Mewse and Bas Vaessen, as well as Eddie Jay Wade and Ethan Lane on the 125 SX competing in EMX – with Jay Wade also doubling up in the British MX2 class.

Sterry has already impressed the team with his speed while training and preparing for the resumption of the MXGP championship – though it has come as no surprise given his presence in the British podium winning team at the MXoN – on debut, too. The move to the MXGP class in 2020 hasn’t been easy, but the friendly Hitachi KTM fuelled by Milwaukee set-up has so far suited Sterry, with all the evidence pointing to a happy rider being a fast rider.

Adam Sterry: “After a difficult start to the year I’m extremely happy to be joining the Hitachi KTM fuelled by Milwaukee team. A British team with a lot of experience, a great bike and a chance to be back racing in the British Championship is something I’m very excited about. I want to thank Roger, Mark, the team and their sponsors for putting everything together at such short notice! I can’t wait to get some testing done and get back behind the gate.”

Roger Magee: “I was approached some weeks ago by a Team sponsor to see about the possibility of adding Adam Sterry to Hitachi KTM fuelled by Milwaukee for the remainder of the 2020 season, after being let down by his former Team. Initially it was for the British Championship, but we have been impressed with Adam’s speed and newfound determination and attitude so we have put plans in place for him to restart 2020 at the next three MXGPs in Latvia. He has adapted well to the Team ‘family’ and we are now able to offer all our many loyal sponsors additional coverage in the MXGP class now that additional funding has been made available to give Adam the best chance at the highest level of motocross.”