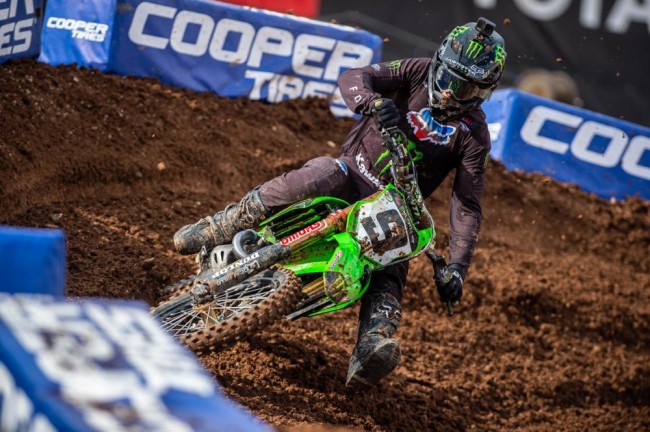 Adam Cianciarulo says he is tired of hitting the ground after another crash ended his chances of victory early in the main event, despite running second at the time. The 450 rookie says the excitement gets the better of him because he wants it so badly, but admits he has to be better in those situations.

Fortunately the Monster Energy Kawasaki rider says there are no broken bones despite being run over by Cooper Webb!

“Obviously you guys saw me squirrel out nd crash in that whoops section,” said Cianciarulo on his Instagram update. “Cooper ran into me pretty good, he didn’t have anywhere to go not his fault, obviously but got me in the back substantially. I just wasn’t able to finish, I didn’t have it in me. It’s pretty painful at the moment but got checked out and all is well internally and all that, no broken bones so that’s good.

“Tired of hitting the ground. I think I was just a little bit too eager being in such a good position early and not having raced in a while, but it was the same for everybody. I have to take accountability for that I have to be better that’s something I’ve always had to reign in a little bit. I get excited and I really want. so we will fix that. first one out of the way, only up from here.