A quick chat with Adam Sterry 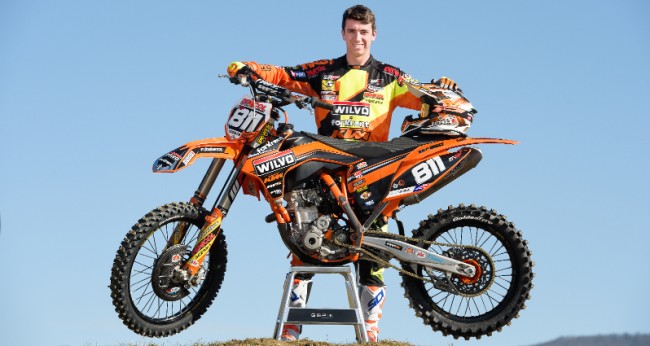 Adam Sterry is one of the biggest talents coming up from the UK, he has always been a front runner in the UK youth scene and became the youngest winner of a BYMX round.

In 2012 he took the step into adult racing by signing for PAR Honda but that team decided to stop.

This year Adam is a contender for both titles so Gatedrop decided to catch up with him for a quick chat.

Gatedrop: The results from Hilton don’t show your real speed, you must be frustrated under the circumstances?

Sterry: Yeah, I was frustrated but it’s happened now. The second race was just a freak accident and it could happen to anyone, anywhere. It a shame when you go through all that effort and just because Higgins wants to, he can penalise you points and lose you a lot of money. I have the whole season to look forward to and hopefully gain them points back.

Gatedrop: what’s your opinion about what happened at first round and Higgins stepping down from ACU?

Sterry: I thought the first round was a disaster and a shame for the sport. Everything was just unprofessional and we go through too much effort and money to turn up for that. Hmm I’m not too sure as he still has a say somewhere so until he’s completely gone I don’t think much will change.

Gatedrop: Do you think the penalty you got was fair?

Sterry: No, Higgins just penalised me because he wanted to! There were plenty of other riders going through there as fast and faster than me.

Gatedrop: Do you enjoy having Ben Watson as a rival…is it helping you both to get faster?

Sterry: Yeah, it’s great for the UK to have up and coming riders. We definitely want to beat each other so it makes us work harder. We are good friends though so we race clean like at Hilton.

Gatedrop: you’ve got a chance to ride Argentina and a few more GP’s this year…. What are your expectations for the GP’s?

Sterry: It’s a new experience for me and slightly unknown but I know where I’m at with my speed so if I get a good start I know I can get a good result.

Gatedrop: Did Ben’s speed at Qatar help you decide to race Argentina?

Sterry: No, Argentina happened because Jake got injured so it made sense for me to step up and race Argentina. I’m not a lover of judging peoples speed as it’s the racing that counts.

Gatedrop: You did well in emx2 last year; the class is probably even more stacked this year…what are you expectations for it?

Sterry: My expectations are to be European champion; it’s my third year racing that Championship so I feel I can get the job done.

Gatedrop: After last season’s success did you do anything any different in your winter program to step up another level?

Sterry: I did mostly the same stuff like I went to spain again, holland/belgium and went away with the team but the biggest difference is I’m a year older, more experienced and we’ve made big improvements on my bike.

Gatedrop: Your trainer RMJ seems to have a big impact on you. How important is it to have people like that in your corner and what advantage does it give you?

Sterry: Yeah very important! I don’t understand why more professional riders don’t have trainers/coaches. We work hard to improve every time we ride and and it’s much easier to do so when someone that knows what they’re doing is watching from the side.

Gatedrop: You were linked with the HRC ride in MX2 for this year but they got Zaragoza instead, where you disappointed to miss out on the ride?

Sterry: No Steve’s team is great, he’s stuck behind me and I’m very happy with everyone in my corner. I decided to stay with Steve and it was definitely the right decision.