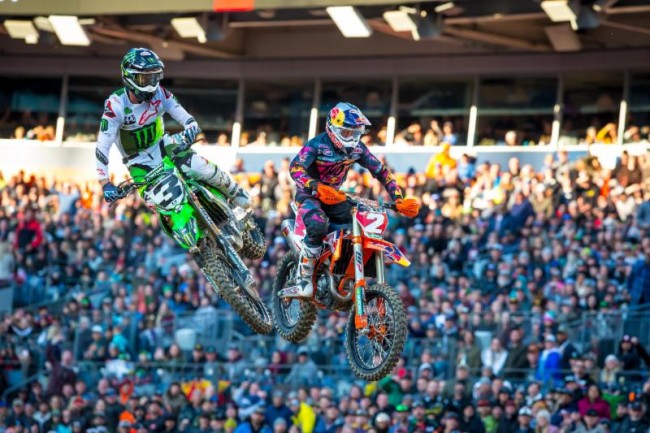 After a long supercross season the AMA riders now get to click some gears and head outdoors for the summer with Hangtown kicking off the 12 round Lucas Oil pro motocross championship this weekend.

Eli Tomac is going for his third straight 450 title but will have stiffer competition this year with some new talent coming from the 450s adding some much needed depth to the 450 class.

Tomac has to start as favourite but Cooper Webb also knows how to win an outdoor title and now with a 450 supercross championship in his back pocket, will surely have the confidence to bring it to Tomac – if he can get his set-up and focus back after achieving his lifetime goal!

Contrasting with Webb’s achievement is Tomac’s frustration at losing another supercross title. He will have a lot of angry motivation to set he record straight with Webb, but as we saw this year, Webb is a scrapper and won’t back down – and is brilliant under pressure.

Marvin Musquin has been the nearly man both indoors and out for the last couple of seasons and now his teammate Webb has seemingly overtaken him as the guy to beat, so like Tomac he has a lot of motivation but the wide open nature of US tracks maybe don’t suit the technical Frenchman’s style as much as supercross or MXGP.

Ken Roczen is a bit of a question mark this year due to his health issues. The German has struggled for energy in the second half of the Supercross season and with the heat of summer, two 30 minute motos aren’t going to be easy unless he can find an answer to the problem.

Blake Baggett usually brings some serious speed to outdoors but can be inconsistent at times but if he can figure that out he might not be far away in 2019.

Zach Osborne is coming in with some great momentum after a good end to supercross, he is a 250 motocross champion and has the speed and determination to be a front runner in his first 450 year but fellow 250 graduates Joey Savatgy and Aaron Plessinger will miss the first couple of rounds due to injury.

Osborne’s teammate Jason Anderson however will be back from injury but with a long lay-off it will be interesting to see how competitive he can be straight away.

Yamaha have Dean Ferris coming in as a replacement for Aaron Plessinger while Justin Barcia is coming back after an injury ravaged supercross season despite that A1 win.

A big question mark is also Justin Hill for JGR Suzuki who is a supercross specialist but didn’t have the success he wanted and now needs to redeem himself outdoors.

In the 250 class it’s an interesting mix of ex GP riders versus the youth of America!

Dylan Ferrandis is coming off a supercross title and there is no doubt he has the speed outdoors but his starts can be his downfall as can the odd big crash, if he gets that sorted he should be a favourite for the title.

Coming straight from MX2 having not raced supercross is Hunter Lawrence. We all known Hunter has the speed but with his first time seeing the tracks and not much practice time in the mornings can he adapt quick enough and how will he handle the heat? On his day Lawrence should be up there and should be challenging for podiums and even wins, again consistency is something he lacked in the GPS and that might also keep him from really challenging for a 250 US title in his first year.

In contrast Thomas Covington is know for his consistency but how will an aborted supercross season affect his confidence? Covington has the outdoor speed as we know from the GPS and he will want to show the Americans just how fast he can go in his first season racing his own national series, but the pressure is really on after his supercross disaster.

Ferrandis’ teammate Justin Cooper had a superb year last year finishing third and with a solid supercross rookie season behind him, he will be coming in with a lot of momentum and confidence. He is apparently flying at the test track and should be a big contender for he title.

Chase Sexton is another impressive kid coming through and just won the 250 East coast supercross series even if he did get a little help from Austin Forkner. Sexton is focused and determined and apparently has a great work ethic, expect him to step it up a level from sixth place last season and be in the mix at the front.

What about Adam Cianciarulo? The US media favourite suffered heartbreak in Vegas and missed the motocross season last year due to injury. Cianciarulo is more of a supercross specialist but upped his outdoor game in 2017 and, with it rumoured to be his last year on a 250, this could well be Adam’s last chance of a 250 title, so motivation should be high if he can recover from his supercross disappointment.

RJ Hampshire also has a lot of speed but can have trouble with consistency while Alex Martin is always consistent and usually a contender but can’t always close out the wins.

With no clear favourite the 250 class is going to have a lot of hungry riders who think this could be their year for a US motocross title!