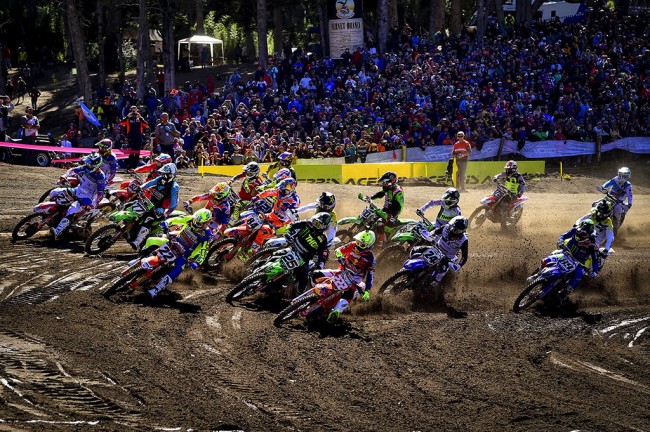 The time has come and the first round of the 2019 MXGP season is ready to start this weekend. The Neuquen circuit of Patagonia Argentina returns as the opening venue of the 19 round FIM Motocross World Championship. The amazing track is set between vibrant lakes and snowcapped mountain peaks and earns its title as one of the best tracks during the season.

The beauty of the location will however come second to the world class racing expected as the best riders from both the MXGP and MX2 categories will test their off-season preparation against one another and battle for the first time! The volcanic and somewhat sandy soil of the Argentinian track combined with the natural elevation changes will demand the concentration and skill of even the most veteran riders.

First visited in 2015 Neuquen has seen its fair share of battles and epic racing with last year’s season opener being one of the most memorable. At the inaugural race back in 2015 the now KTM Sarholz Racing Teamrider Max Nagl took the win. Since Nagl’s win in 2015 Patagonia has seen two other victors with Team HRC’s Tim Gajser taking 2 back to back wins in 2016 and 2017 while Red Bull KTM Factory Racing’s Jeffrey Herlings rallied for an impressive overall last year.

This year Red Bull KTM Factory Racing’s Antonio Cairoli is perhaps the biggest favorite with his 2018 rival and the eventual MXGP World Champion, Jeffrey Herlings, currently out of action due to an off-season foot injury. Cairoli narrowly missed taking the GP win here and later the title in 2018 in one of the most competitively fought championships seasons ever seen. The 9-time champion has been fueled by the desire to improve throughout the winter and he has already seen preseason success leaving many to believe that he enters Patagonia more fit and prepared than ever before.

Though Cairoli could become the 4th winner in the history of the MXGP of Patagonia-Argentina so too could a handful of other riders. For starters Monster Energy Kawasaki Racing Team’s Clement Desalle who was on the podium here in 2018 and the only rider other than Herlings or Cairoli to win an overall last year. Desalle has been discreetly training and testing all winter with Kawasaki’s all new 2019 KX450F-SR. Sometimes overlooked as a strong title contender Desalle can without a doubt put in amazing rides consistently earning him 3rd in the 2018 championship. Desalle has also never been outside the top ten in Patagonia with two podium results, one the previously mentioned 3rd from 2018 and the other being 2nd in 2015.

One of the strongest competitors for the win this weekend is Team HRC’s Tim Gajser who finished the 2018 season 4th overall after struggling in the early stages of the with a jaw injury. Now healed and with a winter of training on his Honda Gajser’s track record of success in Patagonia could improve even further. The Slovenian’s style meshes well with the circuit here in Neuquen and after over a year without a GP to his name the former World Champion is more than ready to return to the top of the podium.

Many riders have made changes since the end of last year some with training programs and others with teams or even categories. Among one of the most notable changes is that of the veteran rider and FrenchmanGautier Paulin who returns to Yamaha this year aboard the Monster Energy Wilvo Yamaha Official MXGP Team. Paulin’s new surrounding and crew could be just what he needs to make podium appearances commonplace. Paulin has raced here in Neuquen on three occasions scoring 5th in 2015, 4th in 2017, and 6th in 2018.

Fellow Frenchman Romain Febvre remains with the Monster Energy Yamaha Factory MXGP Team for the new year and after finishing the 2018 season standings in 6th he knows as a former MXGP World Champion that he is capable of much more. Febvre has been looking fast in the few glimpses we have caught of him riding leading up to this weekend. Febvre’s best finish in Neuquen is 4th and with a pair of 5th place finishes the last 2 years another top five is well within his reach if not a podium. Joining Febvre on the Monster Energy Yamaha Factory MXGP Team is Jeremy Seewer for 2019.

Other riders to look out for in MXGP this weekend are Standing Construct KTM’s newest member Max Anstie, former MXGP of Patagonia winner Max Nagl, and MXGP rookie Pauls Jonass, who won in MX2 class here in 2018, along with Arminas Jasikonis both on the Rockstar Energy Husqvarna Factory Racing Team. All 4 of the above riders find themselves in new situations or teams for 2019 with each having the ability to produce some of the most impressive and unexpected results.

In short, the MXGP season opener in Patagonia Argentina will be the most exciting, unpredictable, and intense race possible to start the 19 round FIM Motocross World Championship.

With proven veteran riders filling the MXGP line up the MX2 category may be overlooked but in reality, it will likely host the most action packed and unpredictable racing of all. The classes combination of youth, speed, and hunger to win can leave even the most rehearsed fan curious as to who to watch.

The obvious answer for most is to look toward the 2018 MX2 Champion Red Bull KTM Factory Racing’sJorge Prado which is a great start as he was dominant last season with the biggest challenge coming from Pauls Jonass who now joins the MXGP category. Prado took 11th in Neuquen last year but was at the time battling through the pain of a preseason injury. Having Prado as a favorite for the win is understandable but the harder task is to determine who could challenge him.

Rockstar Energy Husqvarna Factory Racing’s Thomas Kjer Olsen is a strong contender as a challenge to anyone on the track. The Dane impressed last year on the Patagonian soil with a second overall and a win at the MXGP of Latvia for the second year in a row. The winning speed has been there on several occasions for Olsen and the experience he has gained over the past 2 seasons may be the difference maker for him in 2019.

Team HRC’s MX2 rider Calvin Vlaanderen started 2018 as a newly recruited factory rider and proved he was deserving of the spot by taking his first ever overall victory at the MXGP of Indonesia. Vlaanderen’s skill was shown on several other occasions as he fought for podiums throughout the rest of the season. Now in his second year with the factory Honda team Vlaanderen starts the season more prepared and eager to score more wins.

British rider Ben Watson will be one to watch on the Kemea Yamaha Official MX2 Team. Watson took 4th in the 2018 MX2 Championship and consistently fought in the top five plus he just missed the MXGP of Patagonia Argentina podium last year which will give him even extra motivation this weekend.

One rider that is currently flying under the radar, but a serious podium threat is Bike IT DRT Kawasaki’s Darian Sanayei. Sanayei was battling at the front of the field in Neuquen last year but a mechanical in race one hindered his 3rd place in race 2 for 8th overall.

The two newest factory recruits in MX2 are Tom Vialle on the Red Bull KTM Racing Team and Mikkel Haarup for Rockstar Energy Husqvarna Factory Racing. Both Vialle and Haarup will make their MX2 World Championship debuts in Neuquen this weekend.