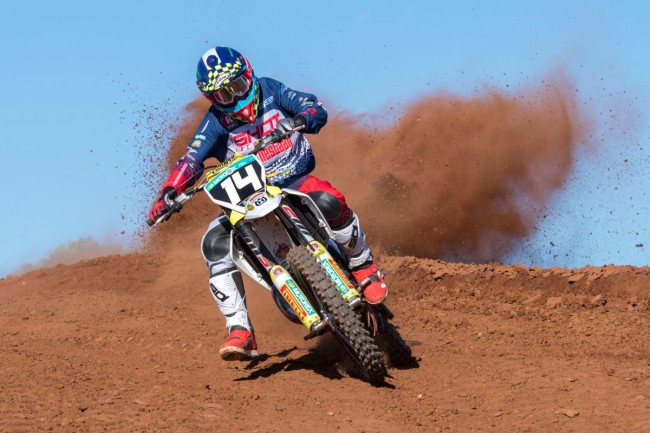 The 2019 EMX125 championship looks set to be a good one with lots of rookies in the class and plenty of them could go on to have promising futures.

Let’s start with Kay de Wolf who’s been snapped up by Jacky Martens factory Husqvarna team so he clearly has a lot of talent – those type of rides don’t just get handed out. The thing that’s impressive about de Wolf is he’s a well rounded rider when it comes to sand or hard pack which is tough to find in young Dutch rider. Martens has even compared him to a young Herlings – big praise right there!

“Kay De Wolf has almost the same feeling as when we started with Jeffrey Herlings. Jeffrey was also 14 years old when he started with us. We hope to be able to make good progress with Kay as well. What Kay is already bringing, looks very promising. For myself and the team, the setup around Kay also gives a lot of oxygen. Guiding young guests to the top is my thing. I think it will be a very nice season”, Martens commented.

Another Kay in the form of Kay Karssemakers has inked a deal with the Junior Diga KTM team in 2019 and he’s looking really comfortable on the 125cc. Both Kay’s have battled plenty of times throughout their career and it’s likely they’ll do plenty of bar banging this season too.

Karssemakers is feeling good going into the season. “My riding is good on the 125cc, I really like it! Last weekend I had the first race of the season with some good riders. It was a good one, some little mistakes but we learn every day. There are some points that I can do better but we will work to be better and better. I will learn from every race and be faster every time. I hope the results will growing during the season. But I’m happy with how it’s going now for the moment – I can’t wait for Valkenswaard”.

The EMX85 champion, Camden Mc Lellan is really fast and has bags of talent. The South African stays with the Kosak KTM team so will be familiar with the people around him heading into the new season. He should be right at the sharp end.

Another youngster that needs no introduction is Liam Everts who improved so much in 2018. The young Belgian will look to improve the same amount in 2019 and then he’ll have had a good season. With Liam’s father, Stefan dealing with malaria it’s been a tough off-season off the bike for young Liam. He’s also not helped by having the pressure of the Everts name on his bike but he’s talented himself and will hope to have a bright future.

One rider with a lot of promise is Dave Kooiker who’s another rider stepping up from the 85cc. Kooiker has bags of potential and is a pretty big kid so might suit the 125cc even better. Ex GP rider, Herjan Brakke who works with Kooiker believes he can work his way to the top.

“I think Dave has the potential, he’s very young and has a good mentality. The road to MXGP is long but with the right people behind him he can make it to that level”, Brakke commented regarding Kooiker.

If your a fast young Dutch rider sometimes it can be quite frustrating because it’s hard to beat de Wolf and and Karssemakers but Scott Smulders has a lot of potential himself. He was de Wolf’s team mate last year so there’s no doubt he’d have learnt a lot from him and he’ll be hoping he adapts to the 125cc well.

Young Swiss rider, Kevin Brumann originally earned an EMX125 ride for this year through the YZ125 bLU cRU Cup but then decided to sign with the STC Racing Team instead as they’ve switched to Yamaha machinery. Considering it’s a Swiss team the move makes sense.

Bogdan Krajewski had a good pre-season racing in Italy and showed he has good speed so he’ll be looking to bring that to the EMX125 series which gets underway this weekend.